The 3 films produced at RGS won in 3 categories!!!

(From DOP & Editor Alana Thompson) ~ The results of the 2017 Worldfest Houston International Film Festival are in and Black Ant Films received an award for every entry!

I’ve picked up three Remi awards as DOP and editor! 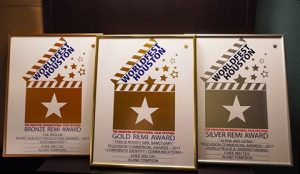 – Bronze Remi for my short documentary “The Rescue”

It’s such an amazing result for my first film festival entry and I couldn’t have done it without the amazing production team that worked on the films with me.
Congratulations to Chee Wei Tay (Director / Producer) and Wei Lee (re-recording Mixer). And a massive thank you to Rowdy Girl Sanctuary for letting us spend a week with them in Texas to create these

We are getting rowdy in the kitchen where Chee Wei Tay producer of the three films that one awards at the international world film festival: