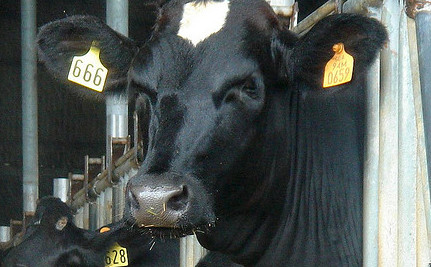 his is an epic love story. This is also a story about Renee King-Sonnen extending that love to the animals that she — as a cattle rancher’s wife — was indirectly responsible for slaughtering and exploiting.

“Mammas Were Running After the Trailer” With Their Calves Inside

Like any good love story, we need to know how Renee King-Sonnen and her husband, Tommy Sonnen, met. Six years ago, Renee’s career as a singer and songwriter put her and Tommy in the same nightclub, says My Vegan Heart Blog. Needless to say, Renee was music to Tommy’s ears. Their romance soon blossomed and Renee ditched the nightclub scene for new pastures: a 96-acre cattle ranch in Angleton, Texas, as it turned out the man she had fallen in love with was a fourth generation cattle rancher.

Renee admits on Public News Service that she was wary of the cattle at first, but she started to change her tune the more that she got to know them and their unique personalities. She would sing to them, dance around them and go as far as naming them, says My Vegan Heart Blog. Renee had fallen in love again.

It really was an idyllic situation. But the arrival of the first red trailer-truck to pick up the calves changed everything. As a consumer of animal products herself, the event still surprised Renee. As she explains in Public News Service, “Mammas were running after the trailer. It just blew my mind. And then they cried for, like, a week or more, all these cows, and I was in a very, very bad state.” Renee had a serious inner conflict, but her compassion and empathy had kicked in. Then, when another red trailer-truck came in, she couldn’t let it take the babies.

But now what she going to do with the cows?

With her husband’s blessings, the idea of turning the family cattle ranch into Rowdy Girl Sanctuary– a nonprofit animal animal sanctuary — was born. On her Indiegogo fundraising campaign page for the first phase of Rowdy Girl Sanctuary, Renee plans on saving over 29 of Tommy’s animals; he agreed to sell them to her for $30,000. And she estimates that she’ll need $5,000 for expenses. She’s currently raised $13,143 of her $35,000 goal.

Apart from the birth of the farm sanctuary, Renee’s also had a personal revolution: she’s decided to go vegan. Her firsthand experience of a mother cow’s grief coupled with documentaries helped her make the change. As she said in Public News Service: “I mean, I had to see it, I had to witness it. I had to realize that I couldn’t be petting my dog and my cat and eating my chicken, I mean, being vegan has changed my soul.” She says that she now sees them as individuals who ”I share this planet with.”

And it sounds like her husband Tommy is going through a similar revolution. On a February 22, 2015, post on the Vegan Journal of a Rancher’s Wife Facebook page, moved by the image of two cows comforting each other moments before slaughter, Renee writes:

This just brought me to a deep sob. I just cant stand it! So glad me and my husband no longer participate in this horrible industry. So glad I’ve gone vegan and he is vegetarian now and more and more going towards a pure vegan diet. Bless his heart. I love his heart for being so willing to change, to walk this path with me – I could never be a part of this industry ever ever again!

I told you this was an epic love story.