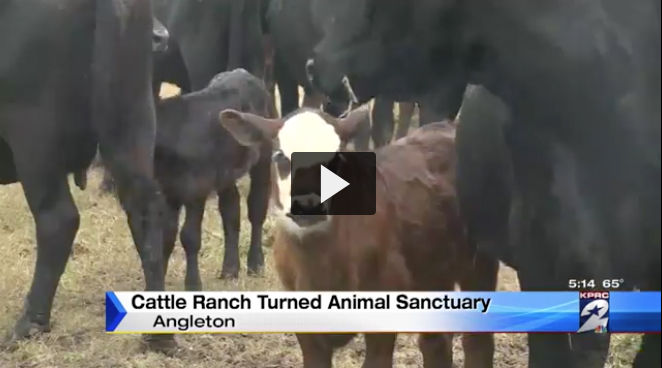 ANGLETON, Texas – A husband and wife have made an unusual decision, turning their Angleton cattle ranch into an animal sanctuary and vegan farm.

Rowdy Girl Sanctuary, located west of the Buc-ee’s on Highway 35, is a non-profit, created nearly one year ago by Renee King-Sonnen and her husband, Tommy Sonnen.  “I’m just an animal lover who started falling in love with the food on her plate,” Renee said.

But convincing her cattle rancher husband to transform his nearly 100 acres of land wasn’t so easy.  “I didn’t think her idea to make a sanctuary was a good idea in Texas,” Sonnen said.

Eventually he told his wife he would sell her his cattle.  Through crowdfunding she managed to raise about $30,000 to purchase them.  Now instead of heading to the slaughterhouse, they graze the Sonnen Ranch, as do pigs, horses, chickens and even a turkey, that were all bound to get killed.  “The more I get into it, the more compassionate I feel about the animals,” Tommy said.

In fact, he is so into it he has joined his wife in becoming a vegan.  The couple has also received support and donations from across the country to help feed the animals and start a vegan farm.  “Vegans are coming out of the woodwork!,” Renee said. “You would think in Texas there wouldn’t be many vegans, but there are a lot.”

To learn more about how you can donate or volunteer with Rowdy Girl Sanctuary, head to: www.rowdygirlsanctuary.com/