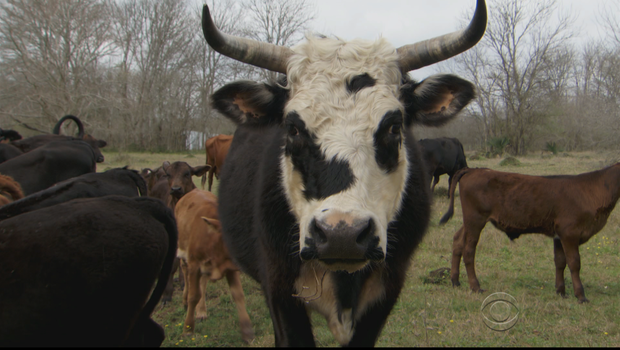 (VEGAN/FARMING) “Every marriage has its issues,” according to Texas cattle rancher Tommy Sonnen and his wife Renee. The couple faced an unexpected conflict of interest after Renee decided to go vegan.

Shortly after, Renee began writing for her new blog “Vegan Journal of a Rancher’s Wife,” which attracted thousands of fans and eventually raised $30,000–enough for Renee to purchase her husband’s entire herd, which he had planned on eventually selling.

After raising the money, Tommy underwent a radical change of heart and stopped eating meat altogether. Today, the couple operates the Rowdy Girl Vegan Farm Animal Sanctuary, the only cattle ranch conversion in the country.

No matter the reason, going vegetarian or vegan is a powerful way to improve your life, your health, and the well-being of other people, animals, and the planet. Read on to learn more about Tommy’s choice of compromise over cruelty. — Global Animal

Angleton, Texas — All cattlemen face challenges beyond their control. But not long ago, on a ranch south of Houston, Tommy Sonnen faced a problem of his own doing.

“You know, every marriage has its issues. It’s not always easy,” he said.

It all began innocently enough. Shortly after they got married six years ago, Tommy’s wife Renee just started hanging out with the livestock. Tommy warned her …

But she didn’t listen. Then she started singing to them, too. And before long, the rancher’s wife had turned into a rancher’s worst nightmare — a vegan, who couldn’t stomach so much as living with a cattle rancher anymore. 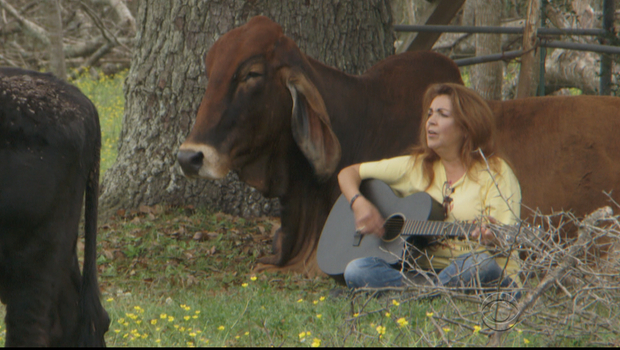 Renee Sonnen singing to one of the cows on the couple’s cattle ranch. Photo Credit: CBS News

“He was just going to get out of the business or our marriage was going to be over,” Renee explained.

Renee said her husband couldn’t believe what she’d said. “And he looks at me like ‘You have lost it! You are crazy!’”

What Tommy didn’t know was that Renee had been secretly posting a blog called “Vegan Journal of a Rancher’s Wife.” She attracted thousands of followers. Through those contacts, Renee was able to raise $30,000 — enough for a hostile takeover.

“All of a sudden, he was fixin’ to be bought out by his wife,” Renee said.

“Yeah, I didn’t appreciate it, but it was growing pains,” said Tommy.

And here’s where this story gets good. After his wife raised the money, Tommy did something rare for a rancher, or any man for that matter — he put aside his ego and reconsidered a core belief.

He stopped eating meat, liked how he felt, and now works for his wife and the Rowdy Girl Vegan Farm Animal Sanctuary. As best we can tell, it’s the only cattle ranch conversion in the country.

So now that he’s changed for Renee, is there anything Tommy would change about his wife?

“I can’t think of a thing,” he said. And there is everything you need to know, to stay married forever.