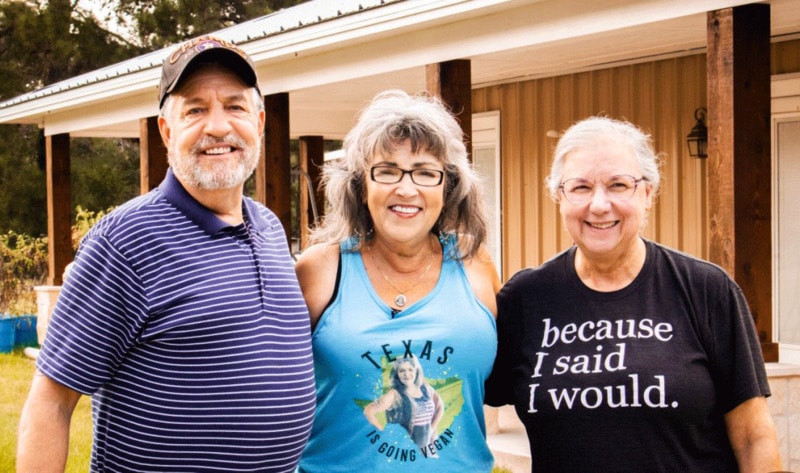 After rehoming their cows to a sanctuary in Texas, Richard and Cindy Traylor are looking into growing hemp, bamboo, fava beans, and micronutrient-rich foods.

Sixth-generation cattle rancher Richard Traylor and his wife Cindy are transitioning their Huntsville, TX ranch toward more sustainable plant-based agriculture after deciding to adopt a vegan lifestyle. The Traylors recently joined the Rancher Advocacy Program (RAP) for the first RAP Live! Summit, a quarterly event that focuses on transitioning from animal to plant-based agriculture that features ranchers, scientists, business leaders, technologists, and food and agricultural experts. “My first memory is cows—my little brother and I chasing them around in the pasture … I used to laugh at veganism and now it’s a way of life,” Richard Traylor shared during the summit. “I want to listen and learn how to make [ranching] profitable without having to slaughter.”

The couple began their vegan journey in 2018 after their cow, Honey, became injured. While Richard prepared to send Honey off to slaughter, Cindy reached out to several local sanctuaries that were unable to help before finding vegan advocate Renee King-Sonnen of Texas-based Rowdy Girl Ranch and the Rancher Advocacy Program. After King-Sonnen was able to assist in rehoming Honey, she and Richard connected on the positive effects of veganism. A longtime environmentalist, Richard credits his conversation with King-Sonnen in helping reduce his consumption of animal-based foods and initiating his transition to veganism and plant-based agriculture. “I couldn’t be a rancher and environmentalist without being a hypocrite. I needed to walk the walk,” Richard told VegNews. “You’re killing the planet and killing yourself.”

Currently, the Traylors are not actively farming and are researching a transition to crops such as hemp, bamboo, and micronutrient-rich foods such as broccoli and radishes. After summit panelist Miyoko Schinner, founder of vegan cheese brand Miyoko’s Creamery, spoke of a potential fava bean and pea protein shortage in the plant-based foods sector, the Traylors began considering growing these essential crops. “It’s really important to grow something that is going to be used by the masses,” Cindy Traylor told VegNews.

Hosted by King-Sonnen and Jane Velez-Mitchell, the next RAP Summit is scheduled for February 6, 2021.