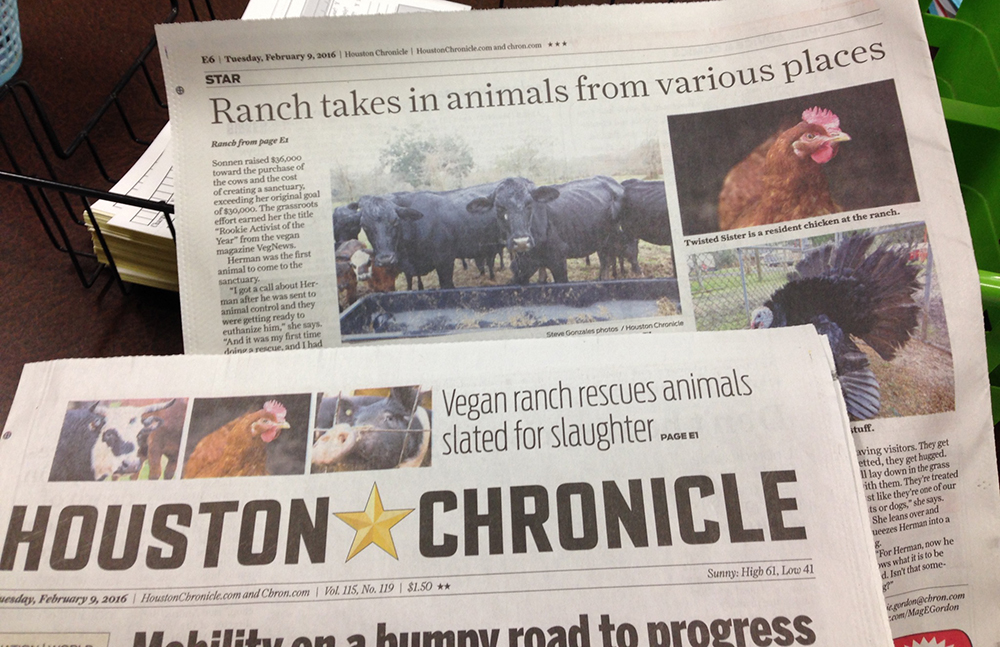 “This is our pride and joy right here,” she says, sloshing over to Herman, a bristly black-and-white pig, big enough to make the cut for the Texans’ defensive line. “This is our Herman. He’s the first animal we rescued.”

When she reaches the corner of fluffed-up straw Herman calls his bed, King-Sonnen drops down to her knees and caresses the white star on Herman’s face. Herman is calm, a gentle giant armed with tusks he has no interest in using and a big belly he rolls over to display, hoping for a quick tummy rub. King-Sonnen obliges, scratching Herman’s stomach. When the pig slides back onto his side, King-Sonnen lays her head on his ribs for a hug.

The property now known as Rowdy Girl Sanctuary wasn’t always a safe space where animals could loll about all day. A little more than a year ago, the 96-acre lot was a working cattle ranch where cows were bred, raised and sold for slaughter.

“I usually kept about 30 cows, but I tried to lower the number to about 25 in the wintertime,” says Tommy Sonnen, who originally bought the farm back in 2002. He married King-Sonnen a few years ago, and his bride wasn’t shy about sharing how much she hated the sight of the red trailer that hauled calves away to the meat markets.

“I would get the checks, and I’d see the poundage. The money for what used to be No. 92, or Tippy, or another cow, and I would just start breaking down because I would see them as pounds of flesh that we got money for,” she says, her voice breaking. “And every time I think about it, I just feel like I was an accomplice to murder. I really do.”

In 2014, King-Sonnen converted to a vegan lifestyle and hatched a plan to buy Sonnen’s herd and repurpose the property as a vegan animal sanctuary – affectionately named for King-Sonnen’s pet cow, Rowdy Girl. She hosted events at the farm and set up a donation page on the crowdfunding website IndieGoGo called “Save the Cows from Slaughter.” Within four months, King-Sonnen raised $36,000 toward the purchase of the cows and the cost of creating a sanctuary, exceeding her original goal of $30,000. The grassroots effort earned her the title “Rookie Activist of the Year” from the vegan magazine VegNews.

Herman was the first animal to come to the sanctuary.

“I got a call about Herman after he was sent to animal control and they were getting ready to euthanize him,” she says. “And it was my first time doing a rescue, and I had to make a decision: Do I let this animal go and get killed, or do I do everything I can to save him?”

When the sanctuary started, there were 30 animals. Now, the number is closer to 65.

Animals find their way to the sanctuary through a variety of ways. Eight cows came from Florida via trailer when their owner could no longer handle their care. Cooper the turkey was brought in by a local activist who purchased him at a farm supply store in Houston. Then there’s Gizmo, a young pig raised by 15-year-old Pearland resident Alena Hidalgo as part of a Future Farmers of America project.

Alena met Gizmo when he was a piglet. She cared for him for several months, feeding him, cleaning his pen and taking care of any medical issues that arose. Typically, FFA students bring their pigs to show and eventually sell them onsite. They go to slaughter from there.

But Alena said she “fell in love” with Gizmo and couldn’t bear the thought of selling him by the pound. She spent months searching for a rescue organization that could take care of her pig after she brought him to show, striking out repeatedly.

“It was hard because, all the while, I’d see my pig every day,” Alena says. “And some days I’d think I’d be able to save him, and others, it was like, ‘It fell through. I’m sorry, Gizmo. You’re going to die.’ ”

Eventually, Alena’s mother heard about Rowdy Girl from a friend at church, and Alena contacted King-Sonnen through Facebook.

“We went down there, and I heard her story, and I knew Gizmo was going to live,” the teen says. “And when Renee was telling us about the sanctuary, I saw her tear up while she was talking about how sad she’d been watching the cows leave before. And I was tearing up too, but for me it was because there was someone else who felt the same way as me. It was like, ‘Oh, I’m not alone. There’s nothing wrong with me, and my pig is going to live.’ ”

These days, Gizmo waddles around in a pen not far from Herman. Alena comes by for a few hours of volunteer work after school each Thursday.

From the outside, life in a sanctuary may not look all that different than life on any other farm, but King-Sonnen insists it is.

She leans over and squeezes Herman into a hug.

“For Herman, now he knows what it is to be loved. Isn’t that something?” 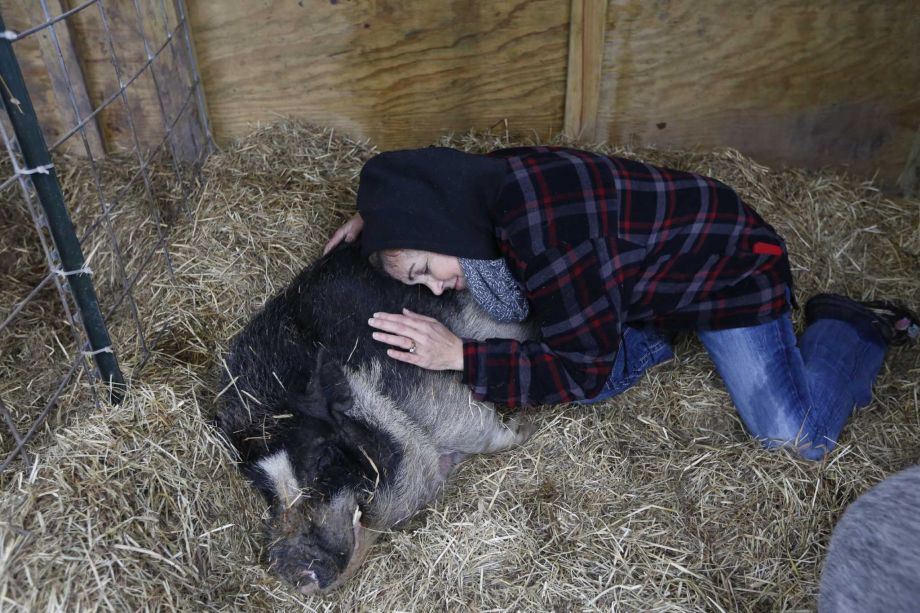 Rowdy Girl Sanctuary founder King-Sonnen lies with Herman in his shelter. Herman, a bristly black-and-white pig, was the first animal rescued by the ranch. 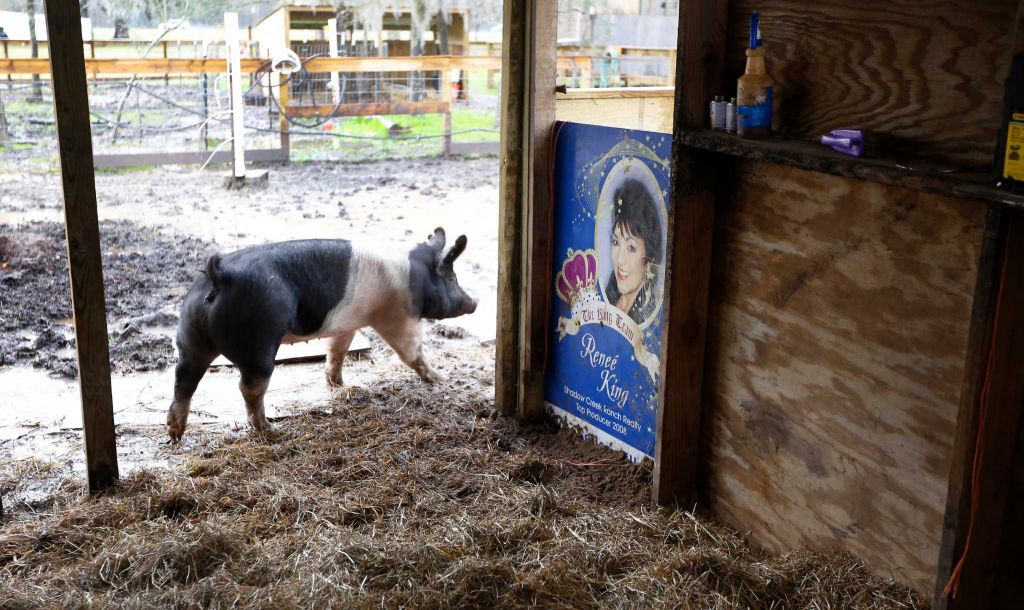 Rowdy Girl Sanctuary, a vegan farm sanctuary The sanctuary is run by Renee King-Sonnen, who recently bought a herd of cattle from her husband in an effort to rescue the cows from slaughter. Now, the sanctuary is home to 48 cows, 7 chicken, a turkey, 4 horses and 4 pigs, who get to stay on the 96-acre lot in a sort of spa-retirement setting. While some of the cows were rescued locally, including the many from her husband’s herd, there are new additions coming in from as far away as Florida, as King-Sonnen works to disrupt the traditional farming system that she feels is cruel to animals. Tuesday, Jan. 26, 2016, in Angleton. ( Steve Gonzales / Houston Chronicle ) 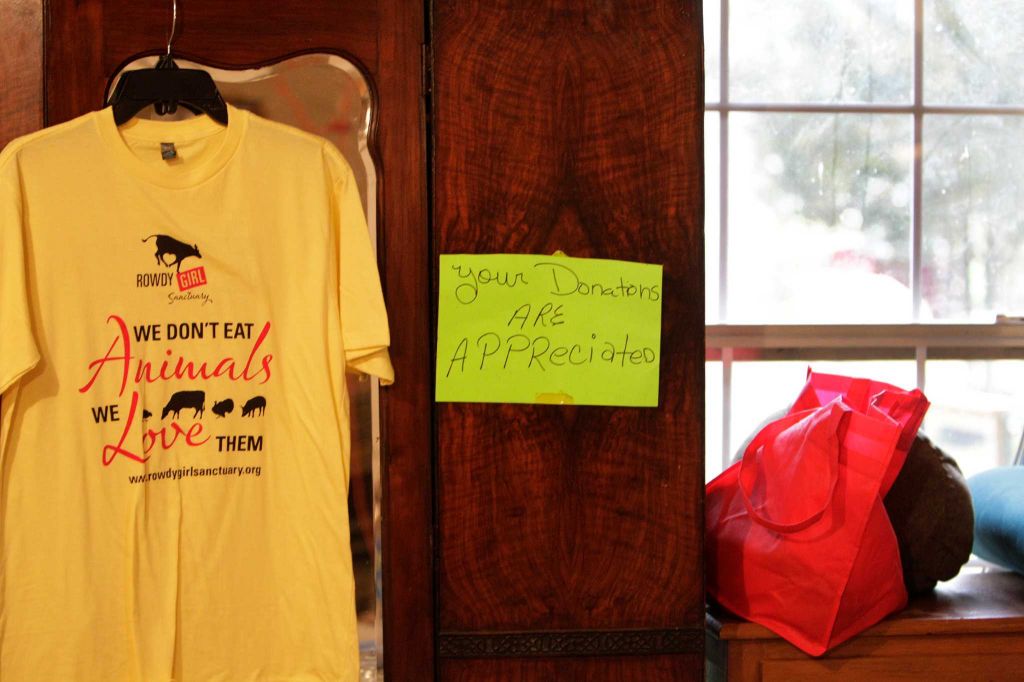 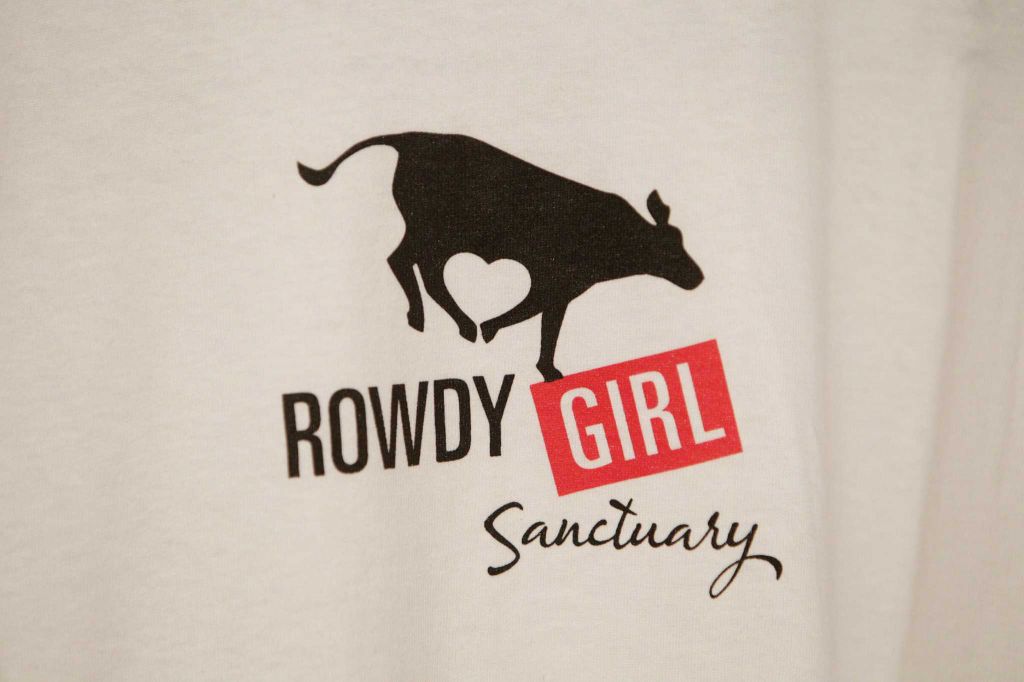 The logo for the Rowdy Girl Sanctuary on a T-shirt 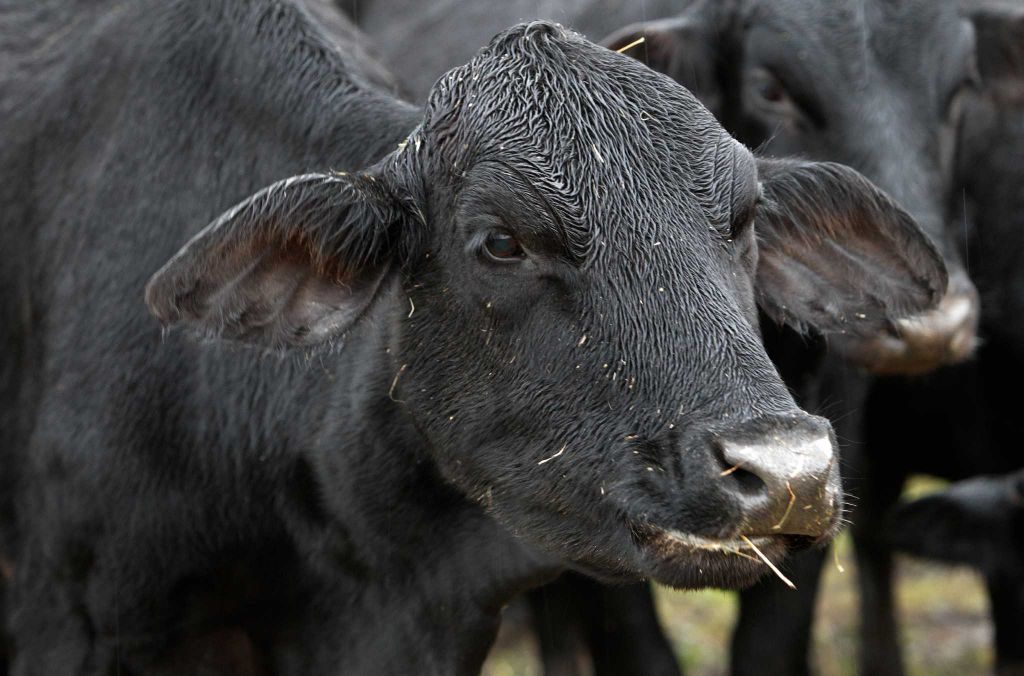 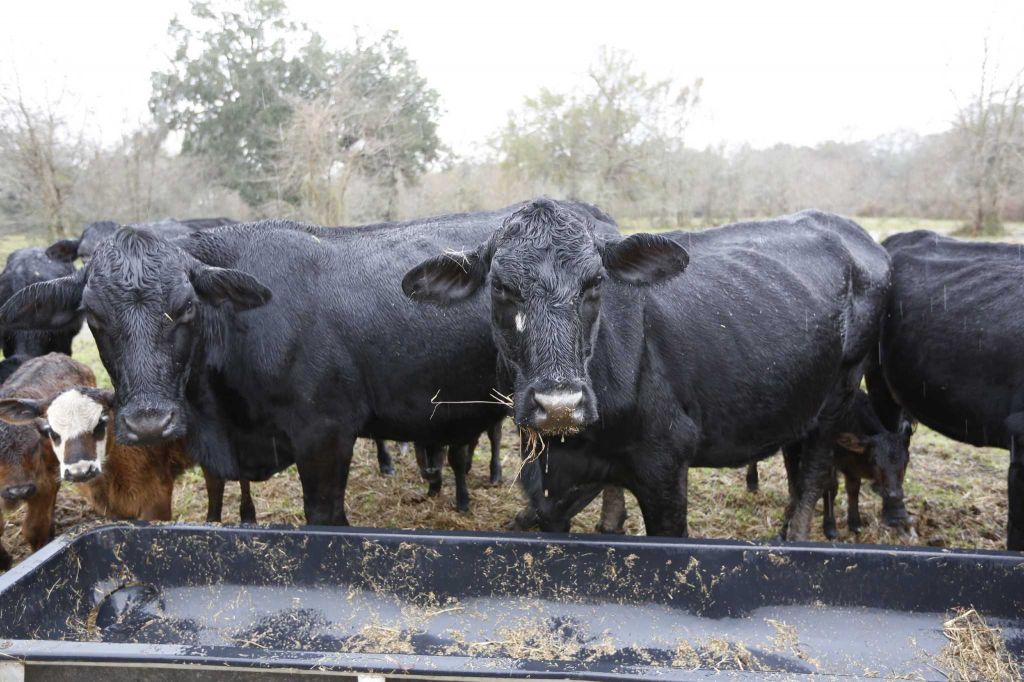 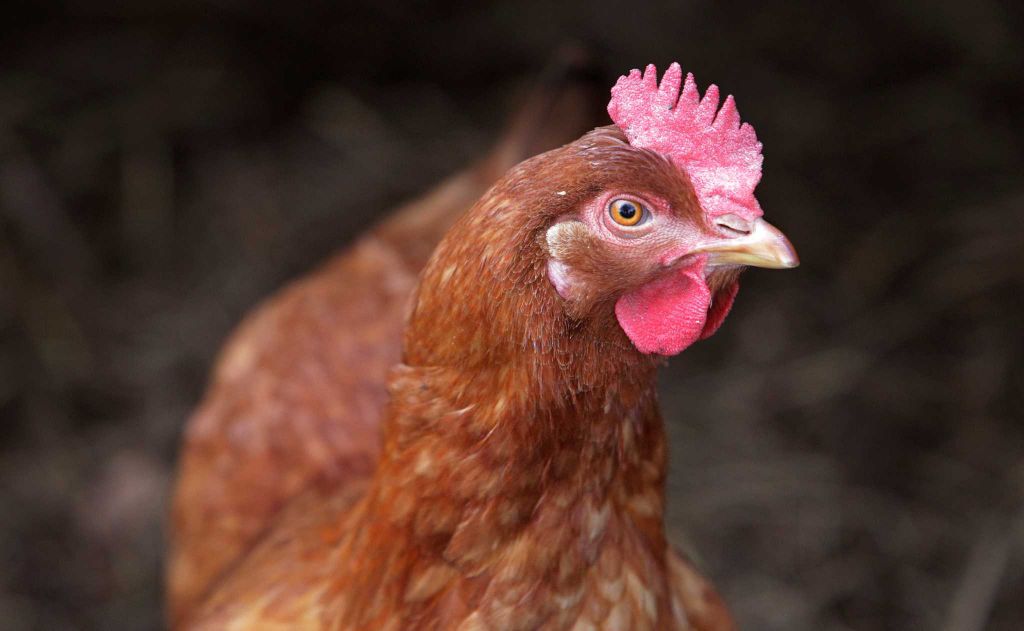 Twisted Sister is a resident chicken at the ranch. 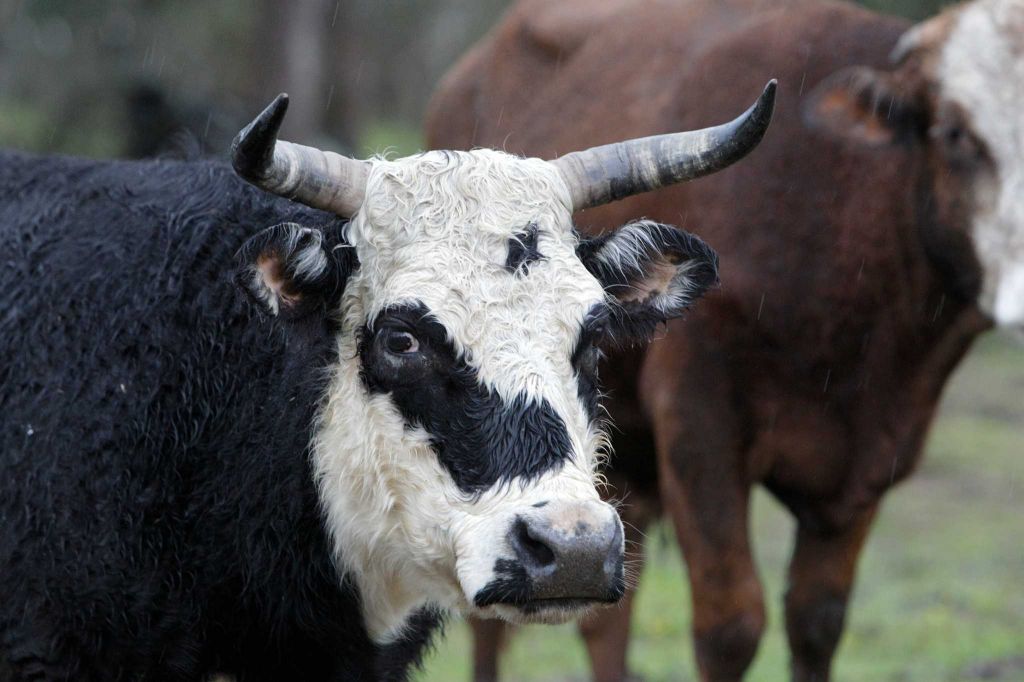 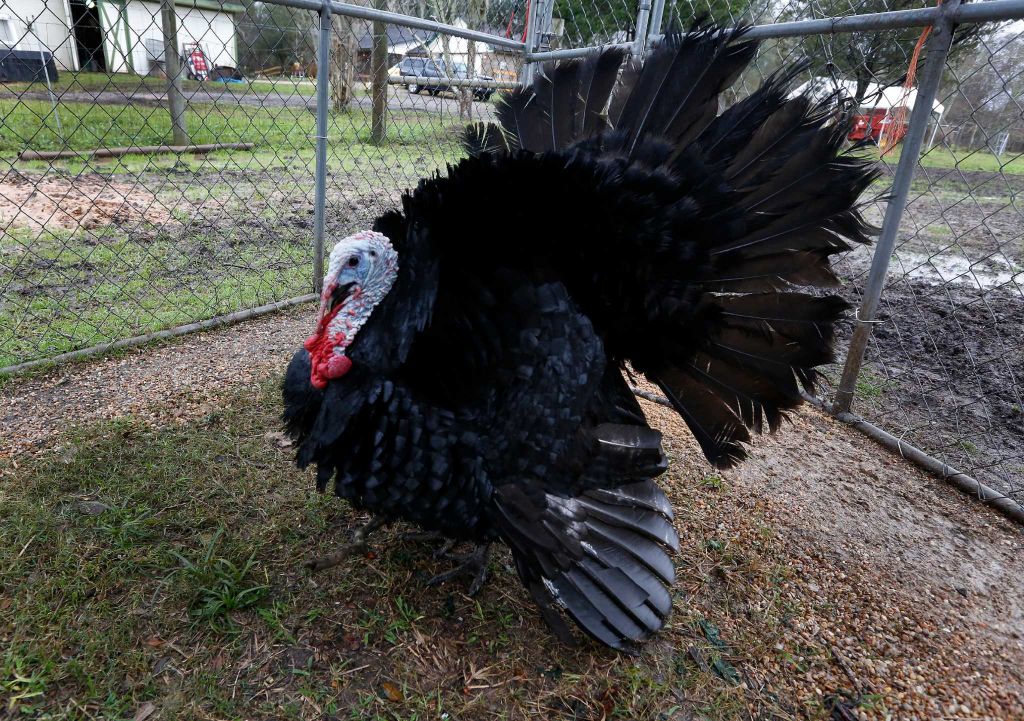 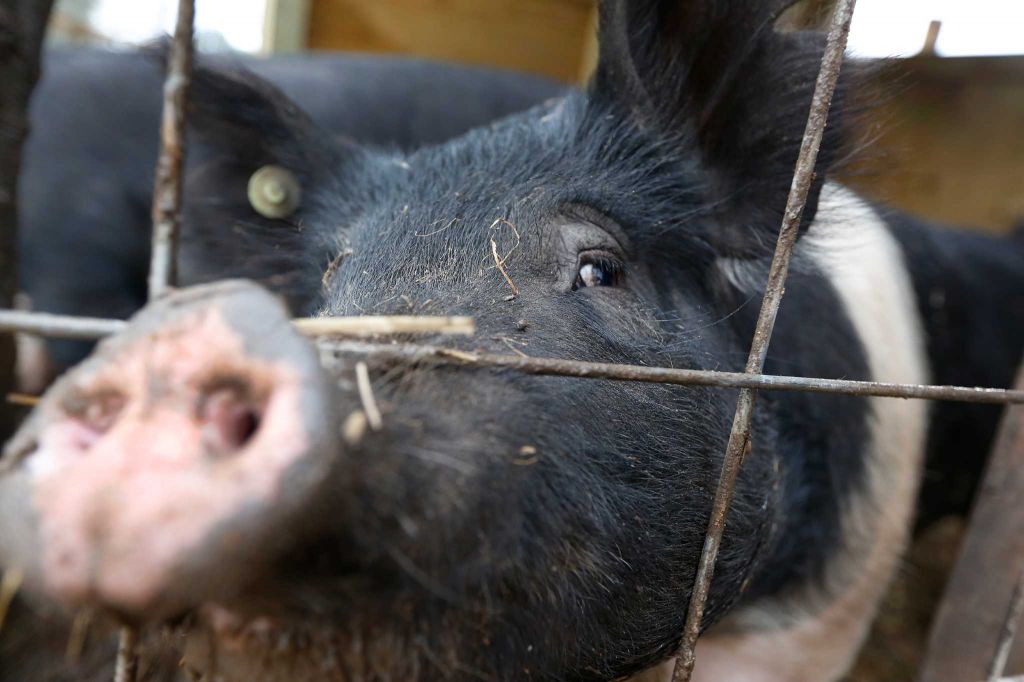 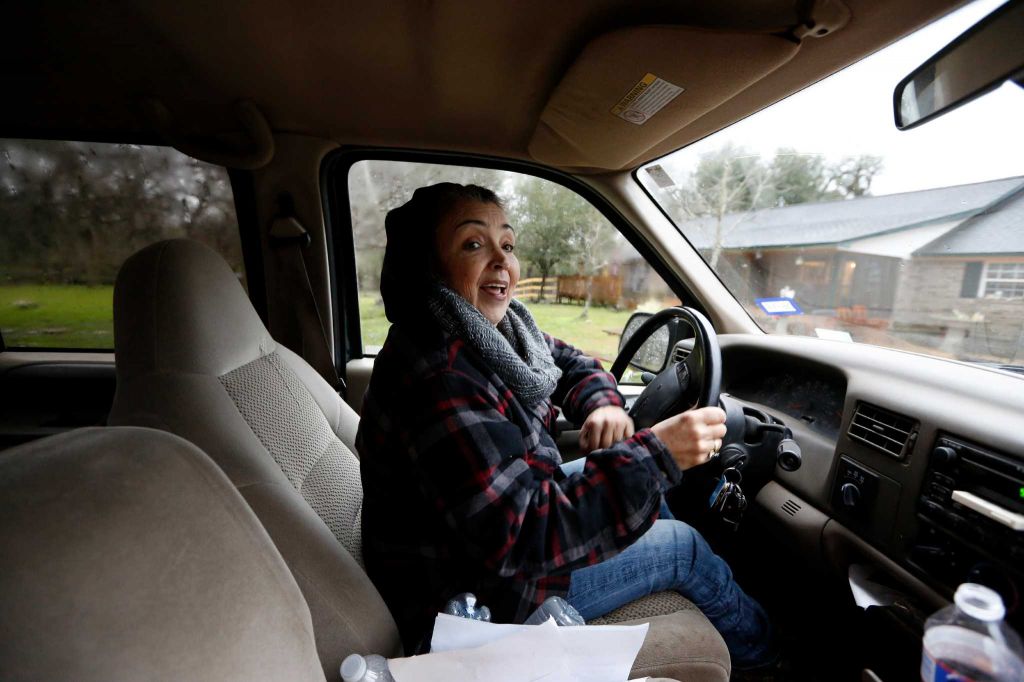 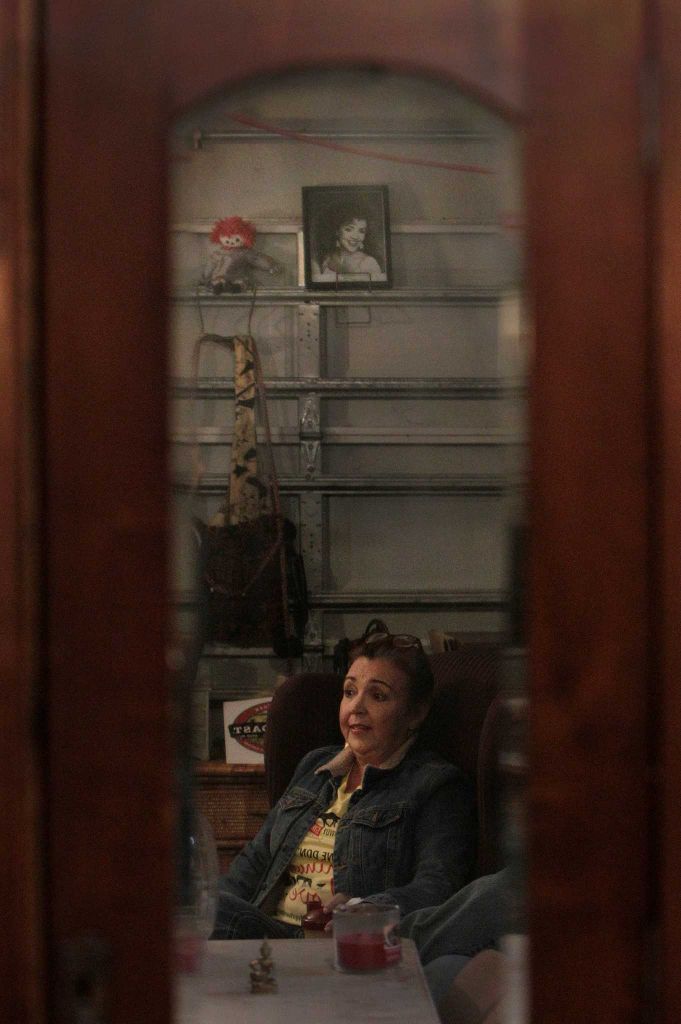 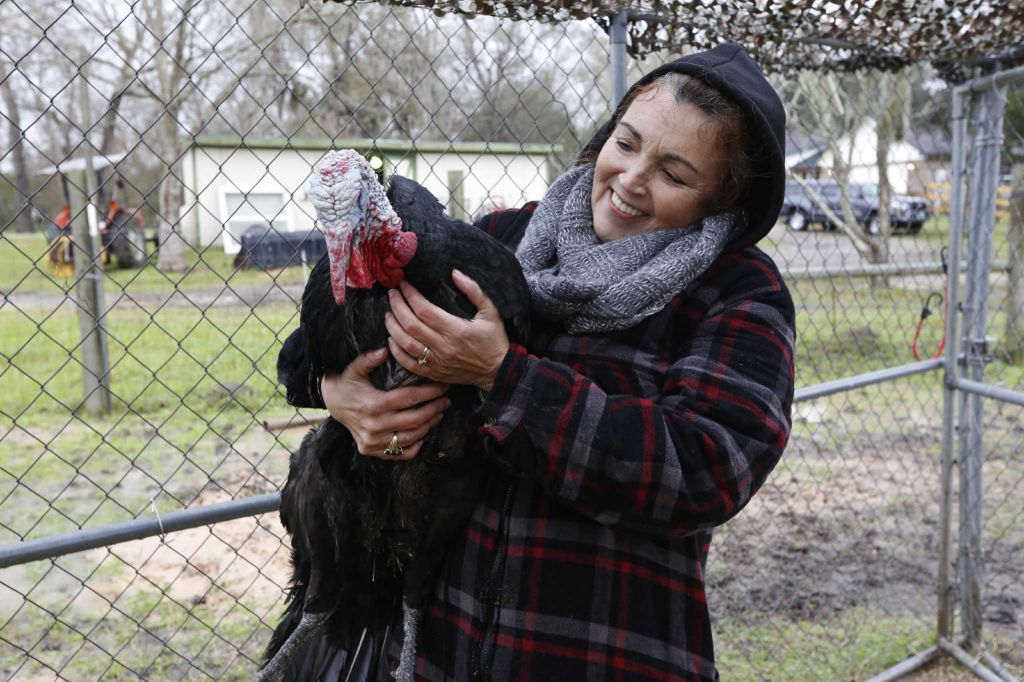 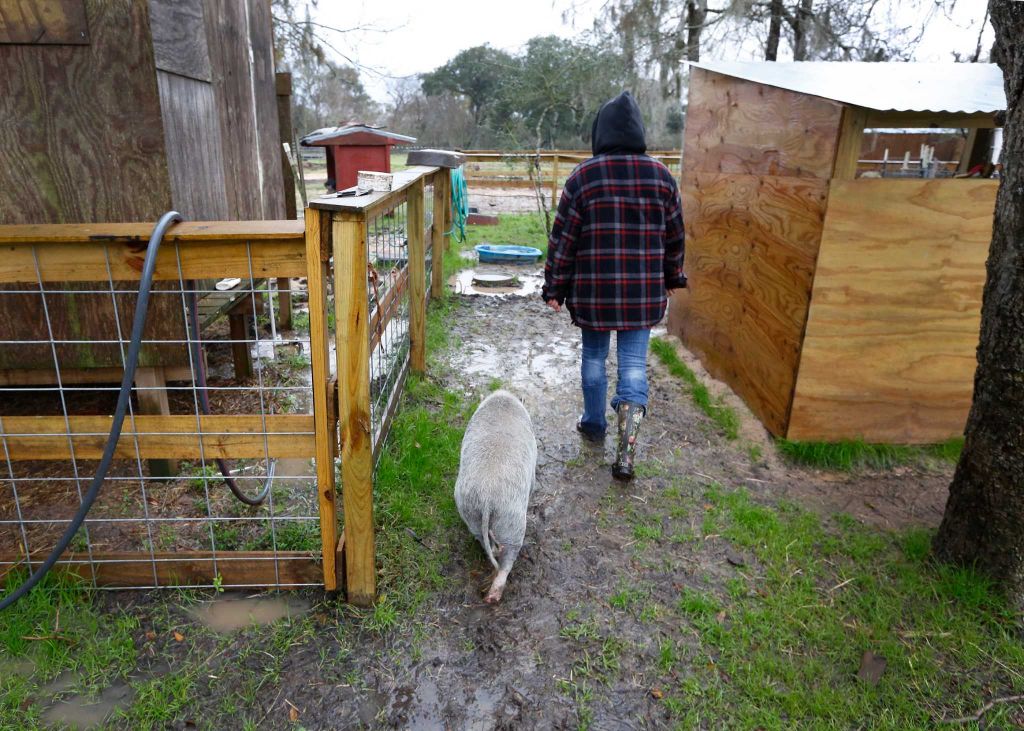 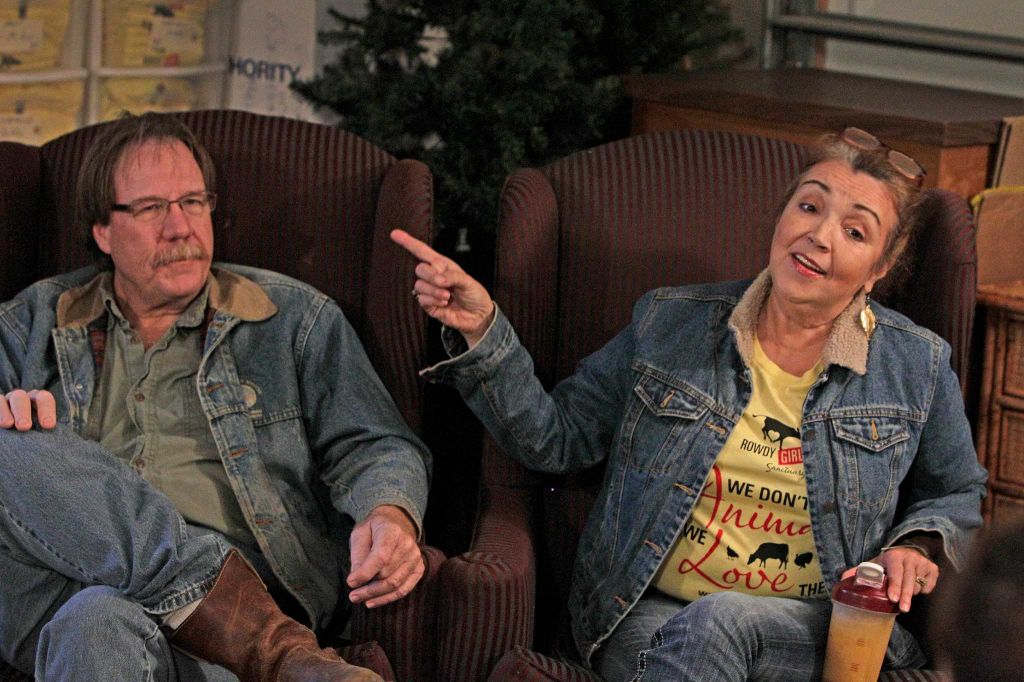 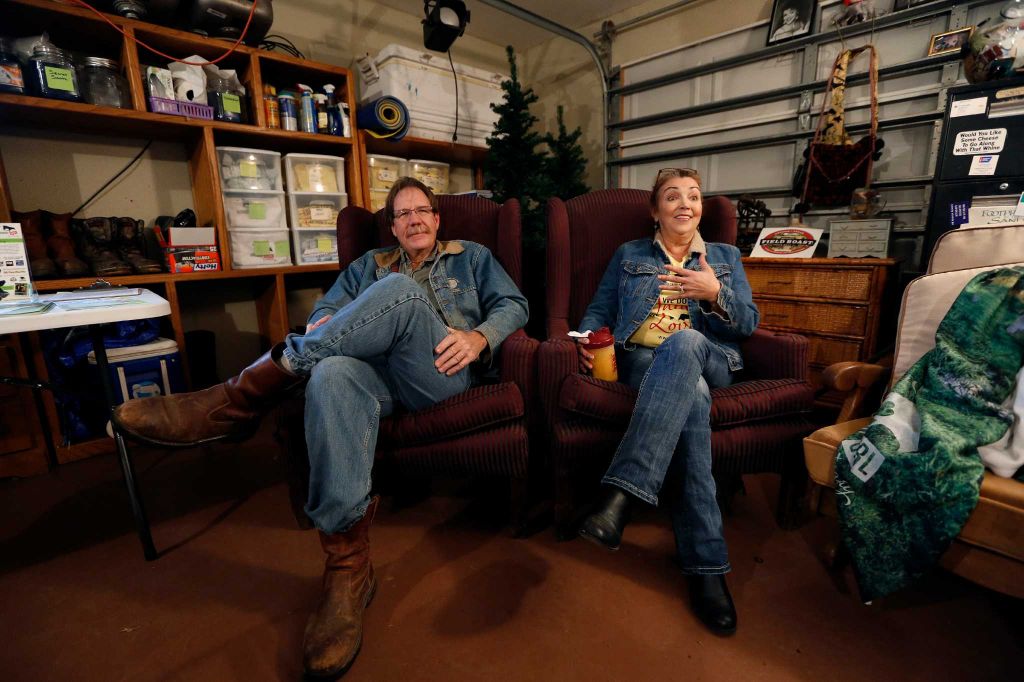 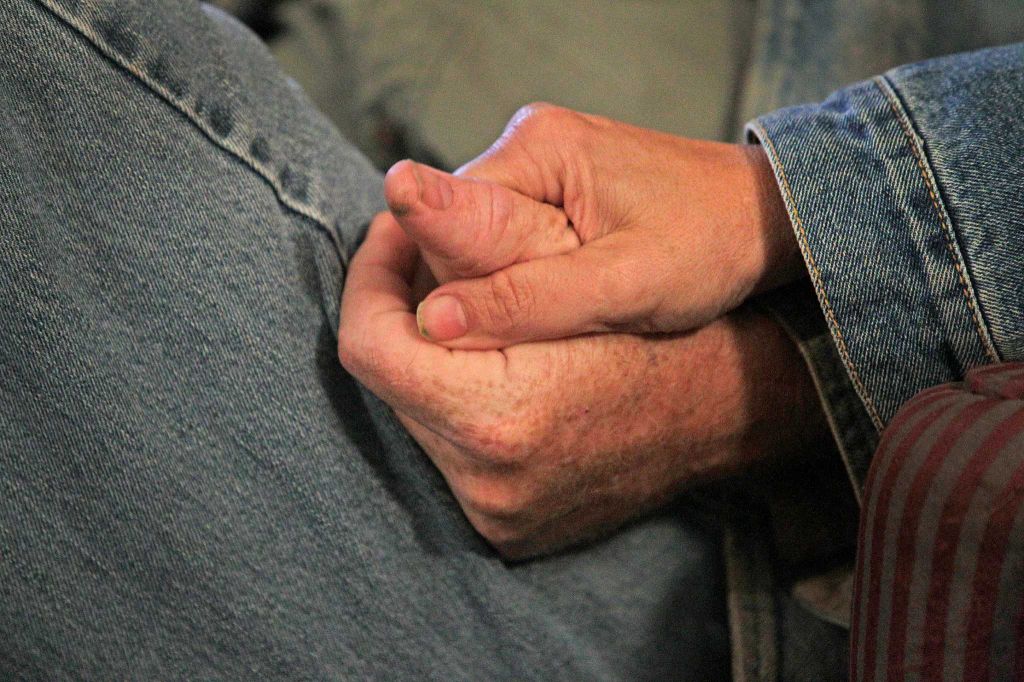 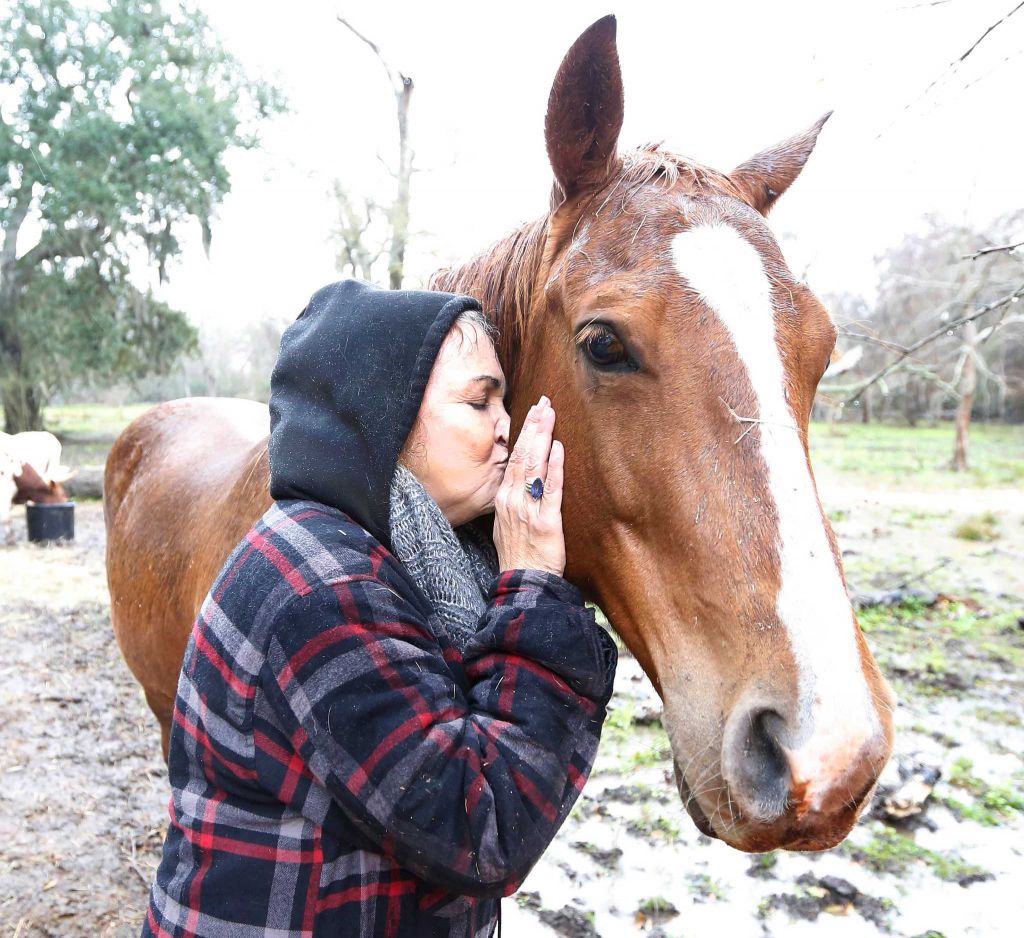 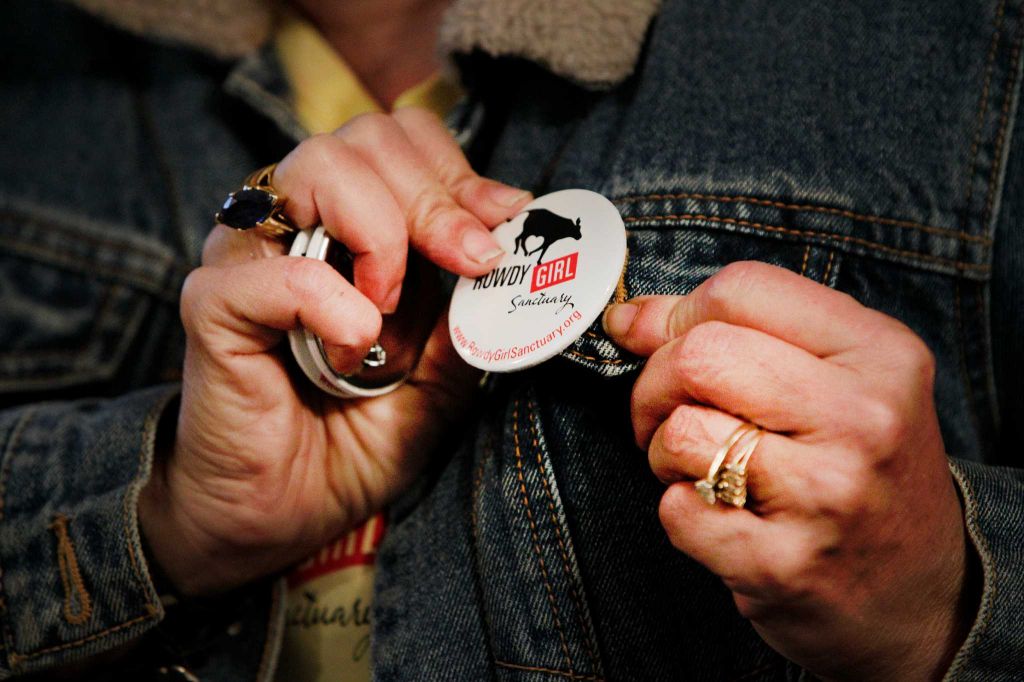 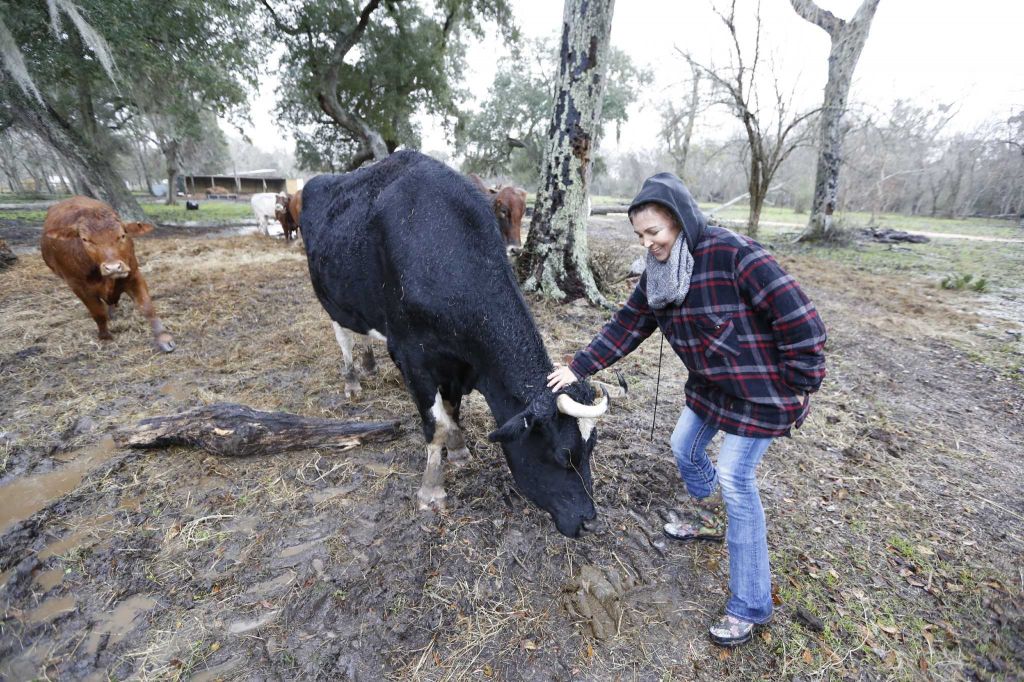 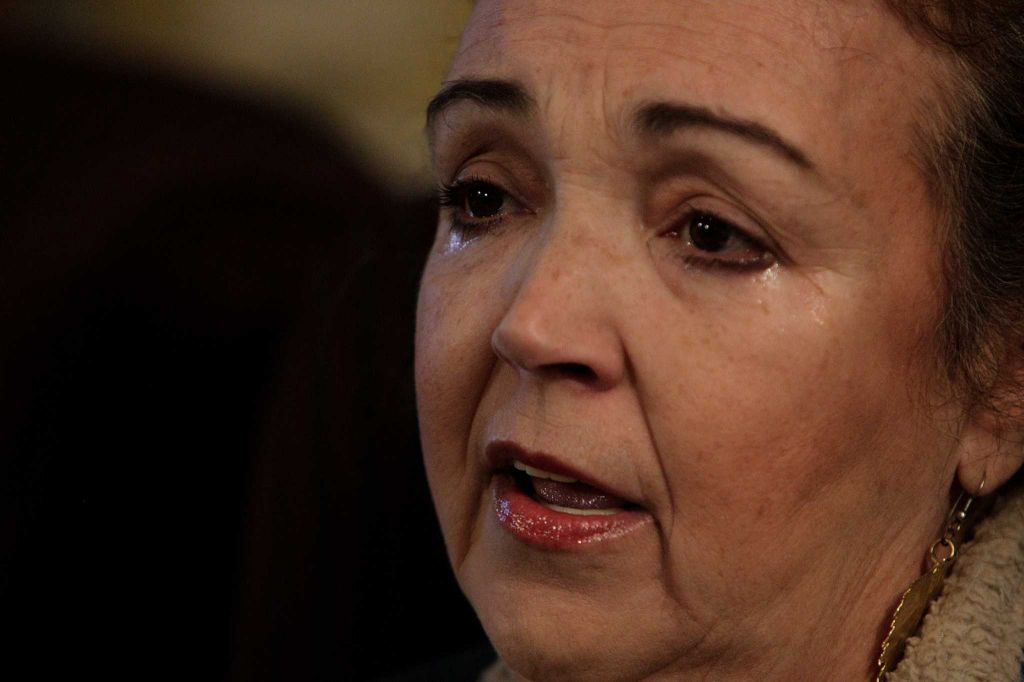 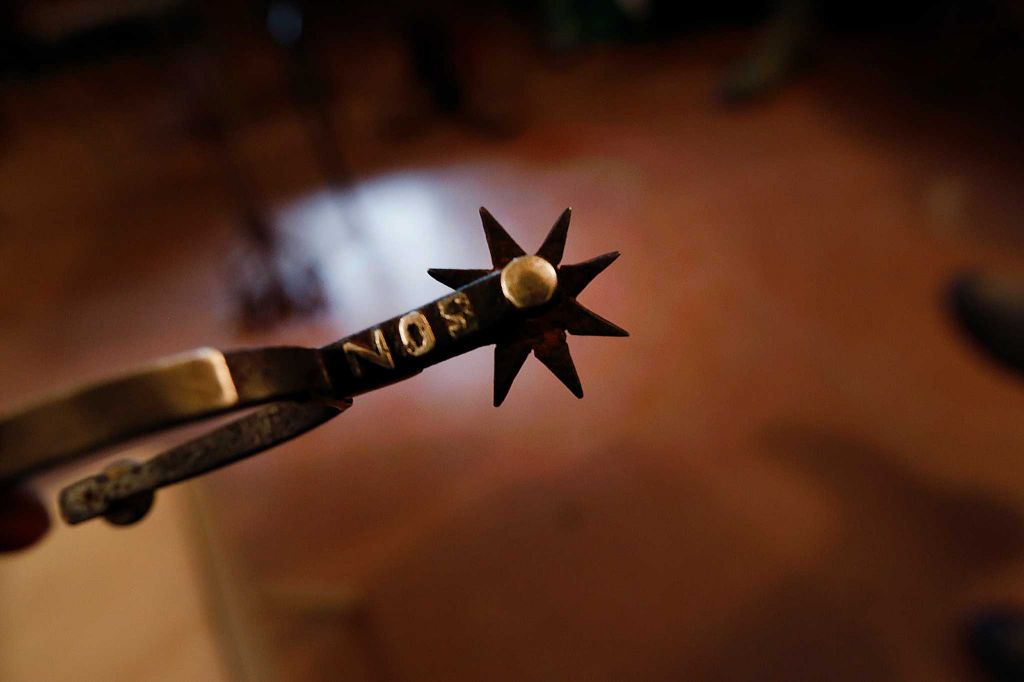 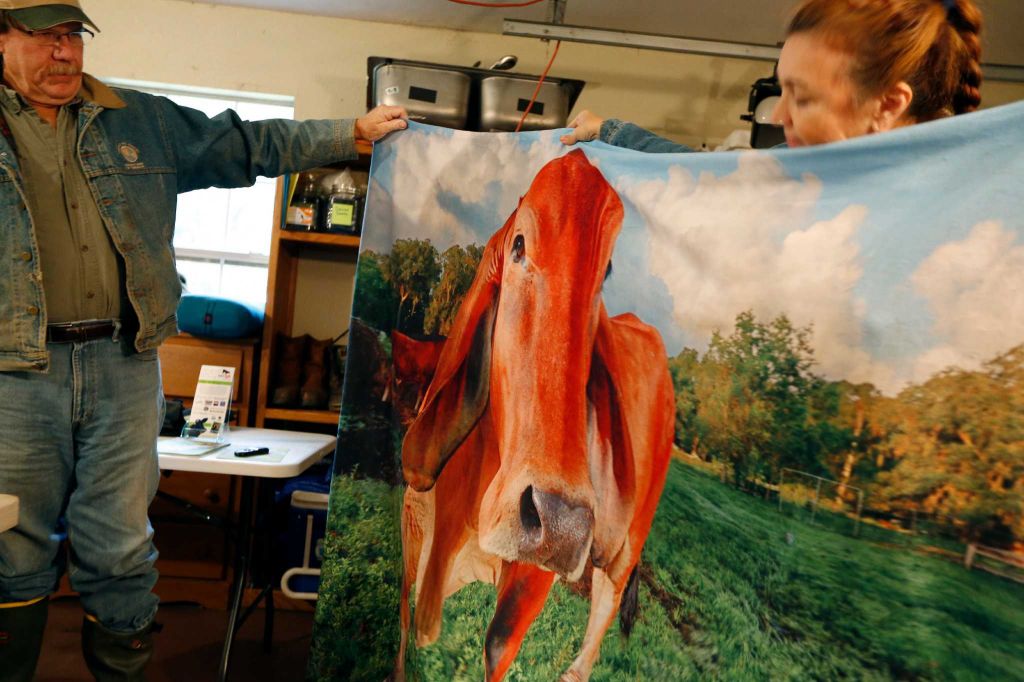 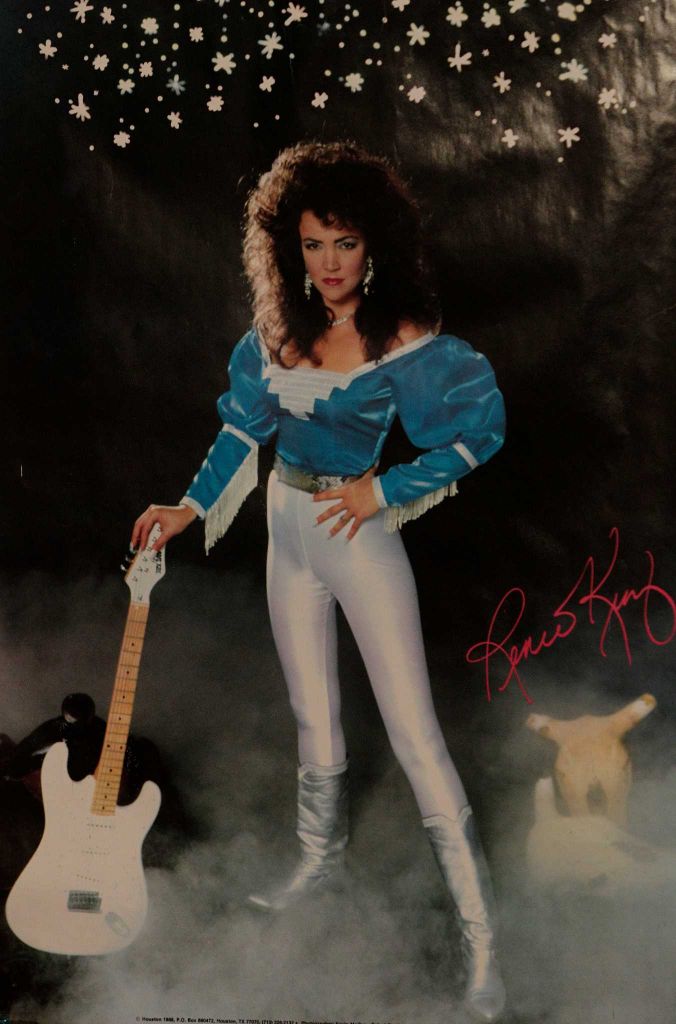 A 1980’s poster of Rowdy Girl Sanctuary founder Renee King-Sonnen, who was a country singer, hangs in the family garage 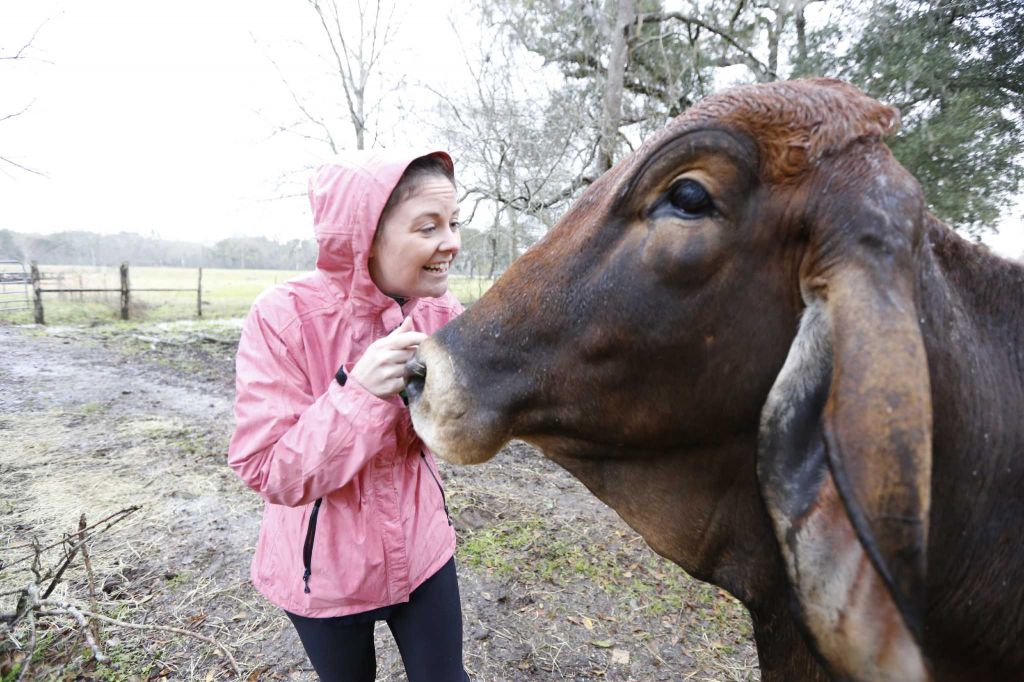 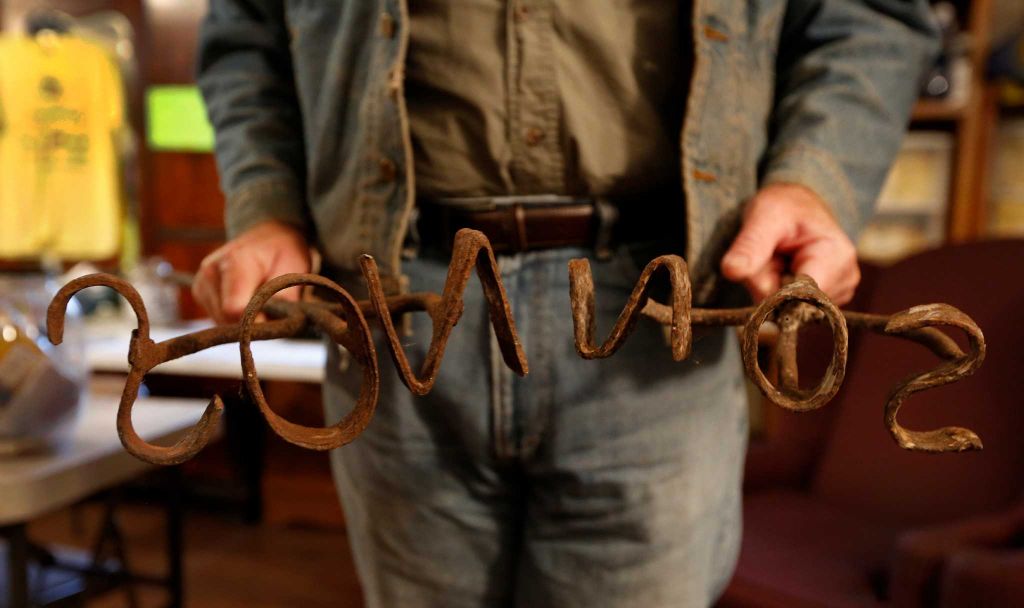 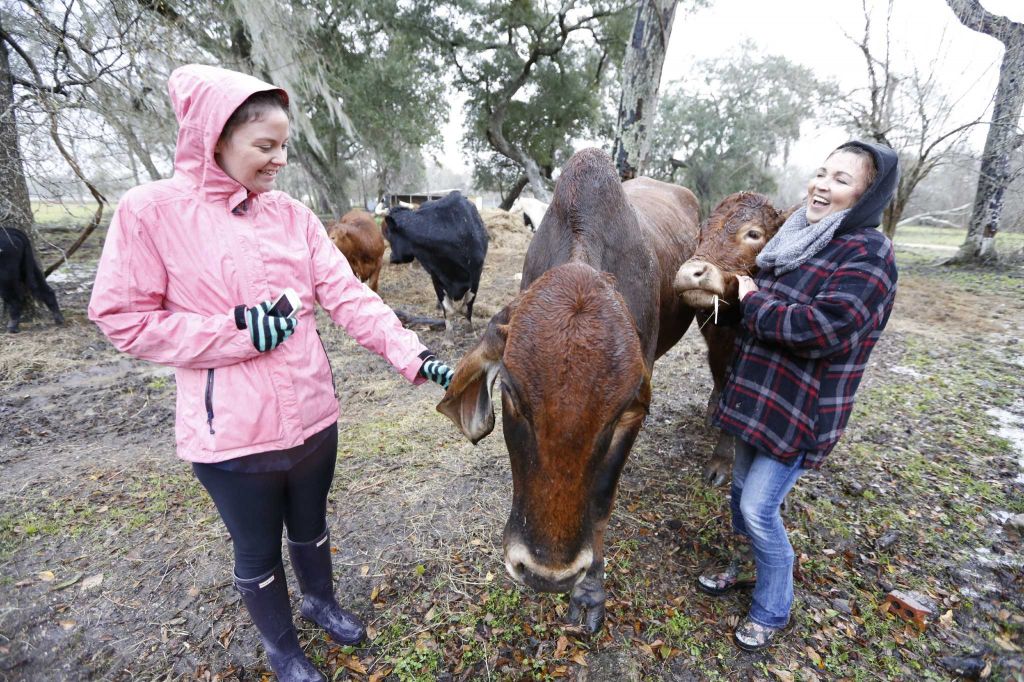 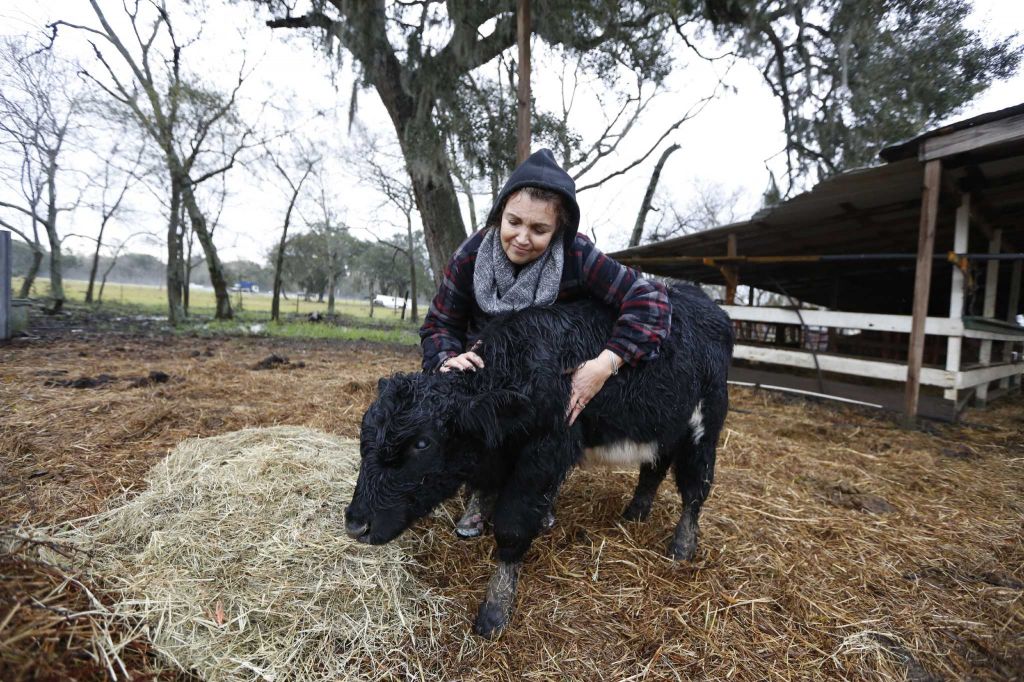