A Cattle Rancher, a Vegan Blogger, and a Very Texas Love Story

It looked like this marriage would never last. Then Renee King-Sonnen had a wild idea.

Renee King-Sonnen sits atop a blue barrel, strumming an acoustic guitar while cows graze lazily behind her. Stars and stripes cover her clothes, from her cowboy hat to her T-shirt and sleeveless vest, while her toes keep the beat inside cherry-red vegan-leather boots.

The Angleton sanctuary she mentions is hers, and Renee, a 60-year-old vegan animal rights activist, has been singing and dancing for the herd here at Rowdy Girl Sanctuary since back when she was a carnivorous cattle rancher’s wife. 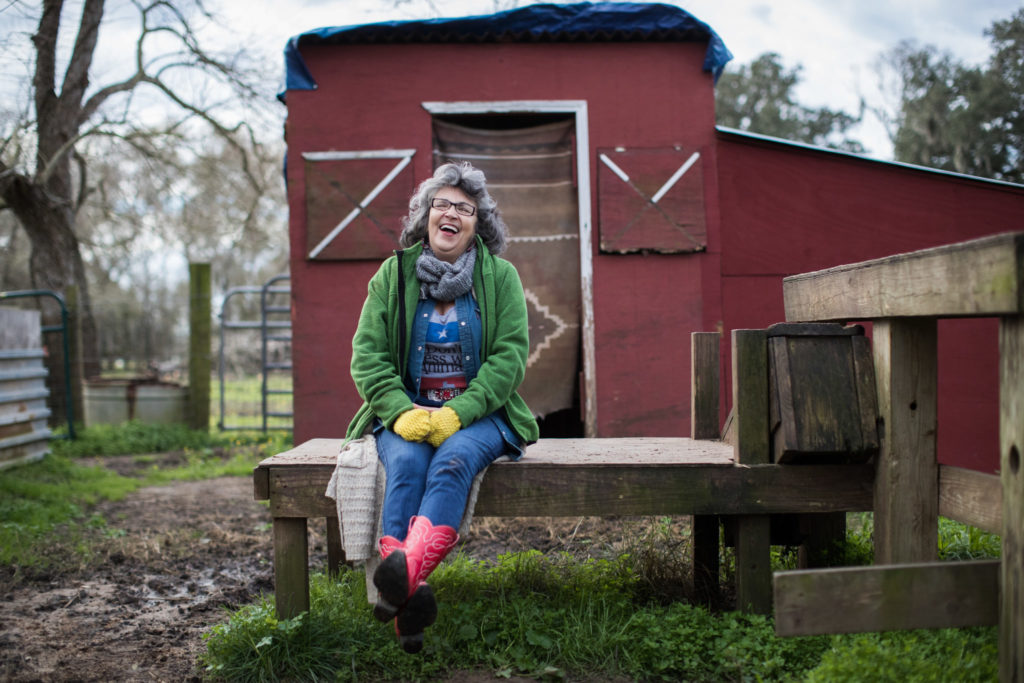 “When my husband was out there working, I’d go out there with him and I was doing tree pose or chanting,” Renee says. “It’s always been something I do, singing with the cows. They love music; they like to listen — so, great audience. Nonjudgmental audience.”

Renee, whose voice is as commanding as it is Southern, grew up in the Houston suburbs, and she describes her previous self as “the rhinestone cowboy type.” Before moving to rural Texas, she traveled extensively with her band, Renee King & Wildcard, and produced an album, Renee King: Queen of Honky Tonk. She also founded and owned a wellness spa, where she was a certified hatha and kundalini yoga instructor and Ayurveda practitioner.

She met her husband, Tommy Sonnen, back in 1991 at a hotel bar in Lake Jackson, Texas, where she was working a singing gig. A friend of Tommy’s called to tell him about a woman in red spandex pants who wanted to meet him and “could sing just like Patsy Cline.” She hadn’t asked for the introduction and was completely unaware of the phone call — but the setup worked. Tommy, a cordial, fourth-generation Texan with a wide smile and a fondness for baseball caps, walked in right before closing time, thinking she wanted to meet him.

“I walked in and it was just my friend and the band and maybe two or three other people,” he says. “And Renee started singing some song by Patsy Cline. She came over and started singing to me and sat in my lap.”

The two hit it off and became inseparable, spending many weekends and holidays together on Tommy’s hunting ranch in West Texas. The couple married in 1992 and lived together in Oyster Creek, a small city near the Gulf Coast where Tommy had a home. “She was still singing for a living back in those days, so I was kind of a roadie,” Tommy recalls.

Tommy, 61, speaks with the gentleman’s drawl of someone who grew up in South Texas, where his family has been living and working since his great-great-grandfather emigrated from Germany in the 1850s. His great-grandfather was the first in the family to become a rancher.

“I don’t know that he ever owned any land; it was open range back then,” Tommy says. ”If you branded your cows, they were yours.” His family mostly stopped ranching after World War II, but he grew up steeped in the tradition. “My dad was always about fishing and hunting and living off the land: gardening, surviving. And so I was brought up that way. But I was always taught you don’t kill the animals for fun, you kill them to eat.” 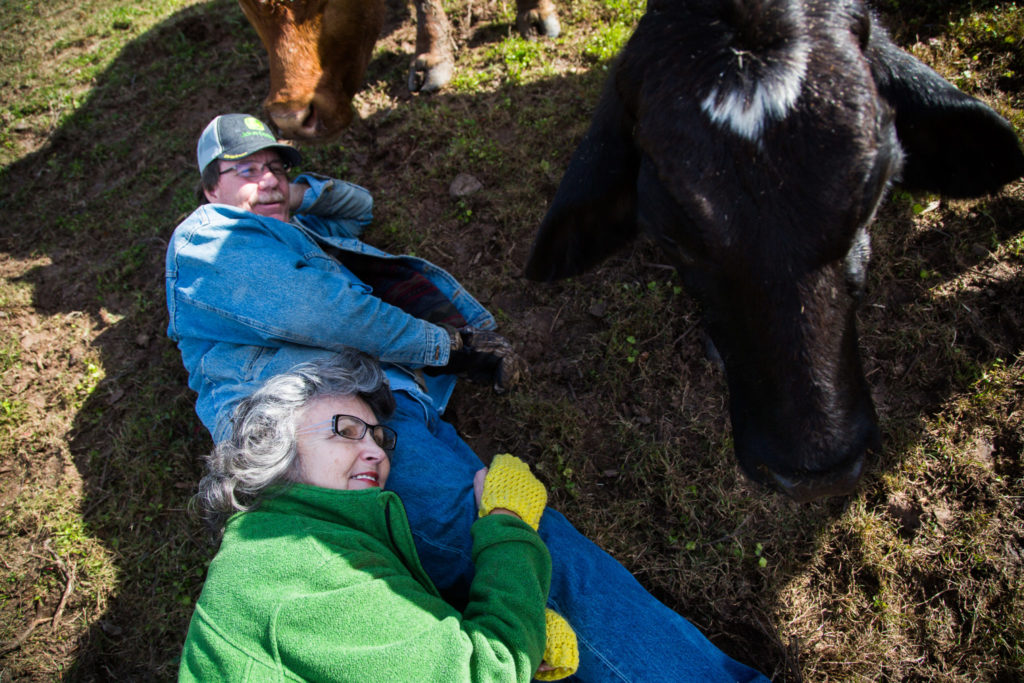 Tommy and Renee’s first shot at marriage didn’t work out. The couple divorced in 1997, and Tommy bought a ranch as a retirement investment. “I had a full-time job, but I was looking at it for when I retired from Dow Chemical,” Tommy says. “I’d be able to cut hay, sell hay, sell cows, and have a little residual money.”

Their romance eventually rekindled, and in 2009 Renee left Houston to live with her ex-husband on Sonnen Ranch. In 2010, the couple married for the second time.

“Moving to rural Texas was not anything like what I expected it to be, really,” Renee says. “I didn’t expect to fall in love with the cows. I had a collection of leather boots and all kinds of Texas western wear. I went to the rodeos and did all that. But when I moved to the ranch, it was the real deal.”

She didn’t gravitate toward the ranch life, or show much interest in the cows, until her husband tricked her into getting involved.

“That’s when I got Rowdy Girl,” Renee says, referring to the young cow who would change her life. “My husband wanted me to be more involved in the business of ranching, so he thought if he told me about these two calves who needed a mother, I would want to bottle-feed them and they would get me interested. That backfired on him.”

The couple took on the two bottle calves — newborn cows whose mother was unable to care for them — and while one sibling, Bobo, died young, Renee grew close to the other. “Rowdy Girl wasn’t a cow to Renee,” says Tommy. “More like a daughter.”

“She became my conduit to the rest of the herd,” adds Renee. “I don’t like to say talk to the cows — but we communicate and I’m able to understand them on levels that I can’t explain. I’m able to get really quiet, meditate, and listen to them in their space, and we communicate there.”

Still, it took years of watching her husband load young cows up for slaughter before Renee’s next big step: She decided to go vegan. 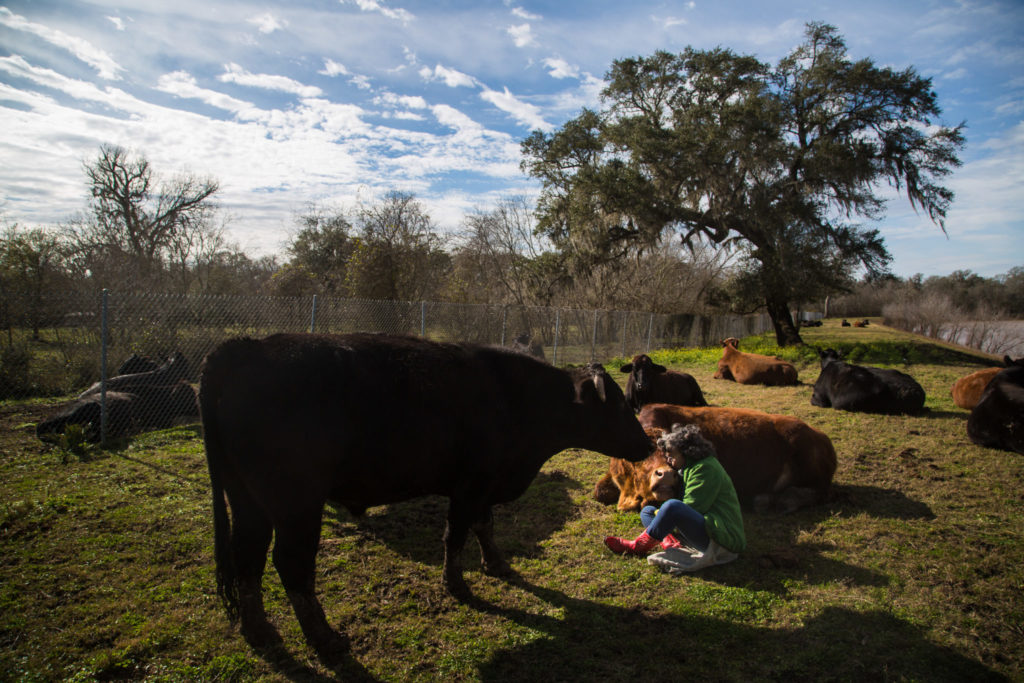 The catalyst was watching her husband and his partner load the calves up in a trailer and take off down the pasture to drive the animals to market. “The moms would follow and chase after the trailer, and the babies would start crying,” Renee says. “Tears would just burst from their eyes. They were so shocked, you could see it in their faces.”

Renee remembers watching all the “mama cows” follow the pasture’s fence line as far as they could, wailing, until the red trailer disappeared. “I didn’t know what to do with it,” she says. “It just broke my heart.”

A few years later, in the fall of 2014, Renee was staring at the chunks of meat in her mother-in-law’s beef stew, and for the first time she saw them as “floating dead animal parts.” She realized she couldn’t bear to watch her husband send baby cows to the slaughter anymore. Soon after, she stopped dabbling in vegetarianism and went completely vegan. She started a blog, My Vegan Heart, and launched Vegan Journal of a Rancher’s Wife on Facebook.

As soon as she decided to go vegan, she knew she had to find a way for her husband to get out of the business of ranching.

“I thought we were fixing to get divorced for the second time because she was raising all kinds of hell about me selling animals,” Tommy says. “I had no intention of becoming vegan. I was just biding my time thinking of how I could get divorced without losing the ranch.”

By early 2015, tensions ran so high between the couple that they found themselves having an explosive argument by the red trailer. “I threw my hat on the ground, stomped around, and said every cuss word in the book several times,” Tommy recalls. “I told her to get out of my business.” Exasperated, he said he would just sell the whole herd. “And that’s when she said, ‘Well, if you’re going to sell the whole herd, why don’t you sell them to me?’” 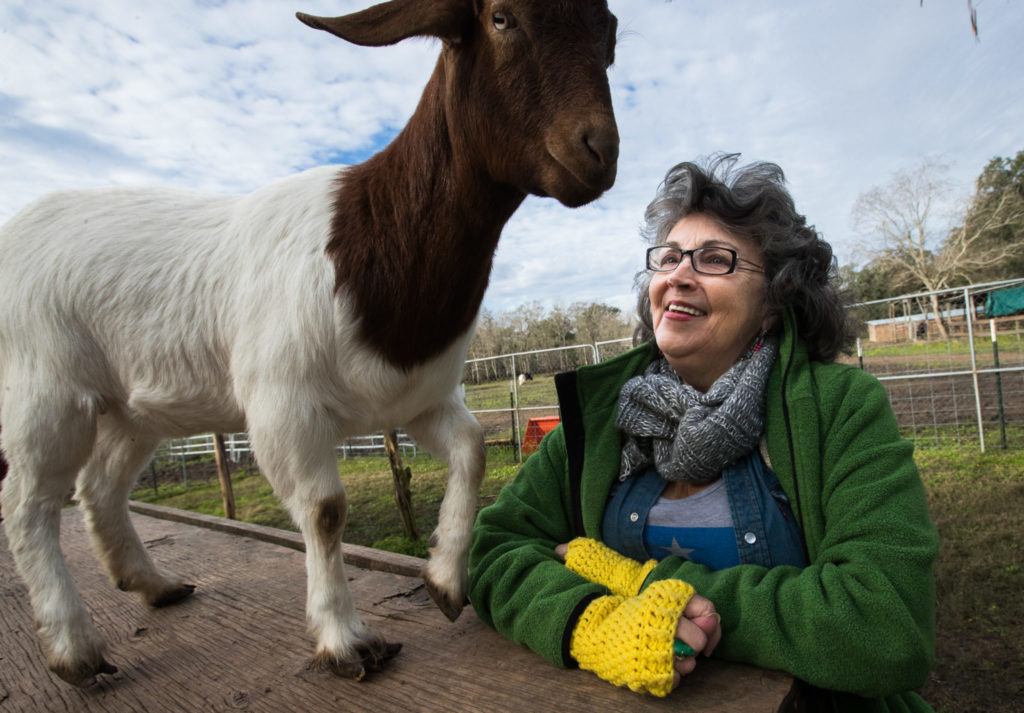 Renee proposed that her husband sell the cows to her at a discount and help her turn all 96 acres of Sonnen Ranch into an animal sanctuary. He agreed to the deal, thinking his wife had “lost her mind” and would probably fail to raise the funds. “I didn’t know she had a network of people already from her blog,” Tommy says. “She had people willing to help her and I had no idea.”

Thanks to compassionate vegans all over the world, Renee’s project was completely funded on Indiegogo in less than four months. Her husband honored his word, selling the herd to Renee for $35,000. Rowdy Girl Sanctuary was born.

Since then, the sanctuary has grown to full capacity, accepting all kinds of liberated animals — from pigs to chickens to goats — from all sorts of situations. “They come from Future Farmers of America students, 4-H students; they come from neglect; they come from slaughterhouses,” Renee says. “Recently, I was really close to a chicken-processing plant, a great big one — I don’t want to say who because I don’t want to get myself in trouble — but there was a great big trailer there, and there was a chicken underneath the trailer, and there were thousands of other chickens inside the trailer, and this one chicken was all by herself. Me and a friend of mine liberated that chicken and brought her to Rowdy Girl. We named her Omen.”

Tommy, for his part, eventually took the leap and went vegan. “Instead of constantly fighting, I said, ‘I’m going to start eating like you, but I’m going to tell you what I think about it.’” he says. “And everything she cooked was terrible. I was coming from one kind of diet and I just thought her food sucked, so I started cooking for myself.”

A few years and many of his own dishes later, he’s become a full-fledged vegan activist. “I’m proud to be a vegan,” Tommy says. “And if you’d asked me in my previous lifetime if I’d ever be a vegan, I’d have said you were crazy.” 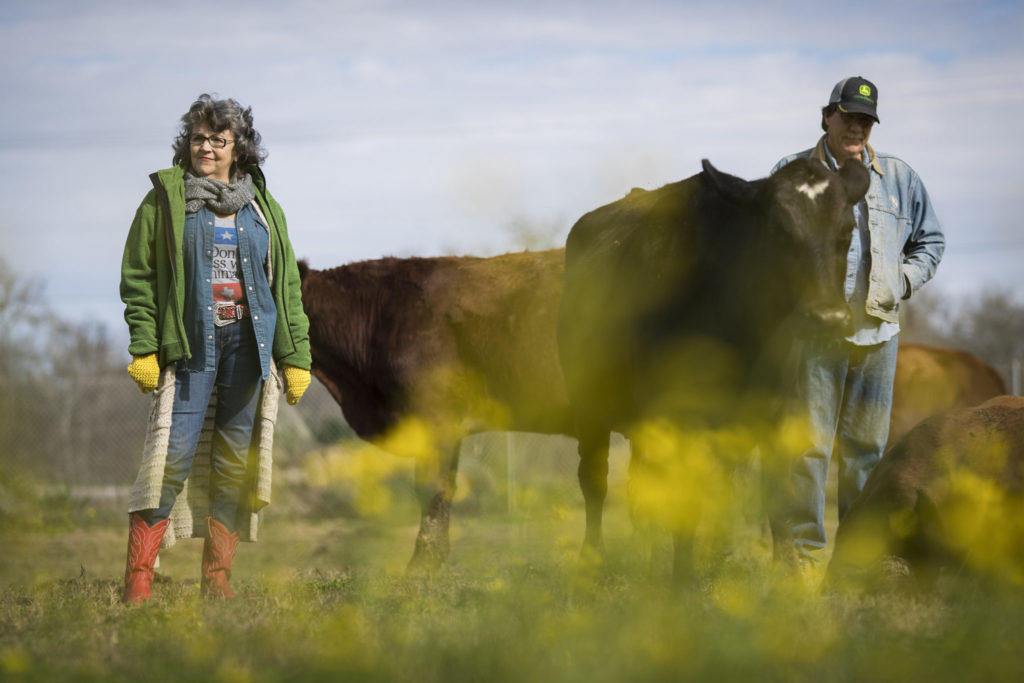 Renee and Tommy have now expanded their efforts with the goal of turning other ranches into sanctuaries. They recently partnered with Farm Transformers to help turn Starlove Ranch, a multigenerational cattle ranch in Giddings, Texas, into an animal sanctuary and cruelty-free outdoor wedding venue.

Their Rancher Advocacy Program focuses on helping ranchers who want to get out of the animal agriculture industry. “These folks are going to become mushroom farmers and hemp farmers now,” Renee says. “We’re working with a lot of great folks in the movement to help make that happen.”

She adds that embracing veganism has changed her outlook on almost everything, transforming her politics and helping her see how all oppression is connected — from the subjugation of women and girls to racial injustice to LGBTQ discrimination. She feels that the animal rights movement is, at its core, a social justice movement.

These days, Renee has speaking engagements booked all over the world, but when she’s home at Rowdy Girl, this once-reluctant rancher’s wife will tackle any farm chore waiting to be done.

“It’s all about what’s required of me to take care of these animals,” she says. “I don’t even look at it as a job. It’s just who I am.”