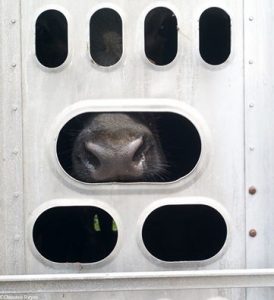 “His face is branded on my soul, and I know his fate is death.”

His face is branded on my soul, and I know his fate is death.  While getting gas at a local Buccee’s, I was jolted into the consciousness of the smell of cow manure. That pungent odor wafted thru my nostrils, and I was feeling right at home except I knew I was on a busy highway at the intersection of 288 and Hwy 35.  I looked up and there along the side of the convenient store’s huge parking lot was one of those horrid livestock trailers.  I could clearly see the animals as they wrestled back and forth miserably.

As I continuted to pump my gas I saw a nice looking man jump out of the truck and I watched him walk into the store.  I was wishing my gas would pump quicker because these precious souls in the cargo truck were calling me.  I knew I had to go over and witness their final hours.

I put the pump back in its place and looked both ways before making my way over to the truck.  Images of Anita Krajnic filled my mind. I could see her with her water bottle giving water to parched pigs and then being arrested for her compassion towards them.

I didnt care! As if in a trance, I walked briskly to the metal prison.  I placed both hands on the bars and I spoke to them.  There were at least 16 to 20 gentle bovine in that truck, and one caught my eye.  He looked right at me with eyes that pierced straight through my heart.  His life blood pounded into my consciousness and his soul merged forever into mine.  I saw him! I felt him! I heard him! For a moment in time, I was his only witness.  I said “234”, I see you, and I’m so sorry for your fate. I wish I could open the gate and free you from this prison and take you home with me.”

He stared intently in my eyes, pleading with me to stay. His very being was as strong of a presence as I’ve ever felt.  He wanted to live.  He knew he was going to die. The driver came out of the store.  He was dressed in crisp starched blue jeans, a nice western shirt and wore leather cowboy boots–a stark contrast to the way his cargo looked. Obviously, he was only the driver–an acommplice to the murder of all the innocent victims in his care.

As he approached, I hollered out to him and he stopped with a big smile on his face that quickly dissipated when I asked him “Where are you taking these babies”? He looked at me quizically and said “What”?  “I said, where are you taking these babies”? His demeanor quickly shifted.  He quipped, “Huntsville”, as he side-stepped towards the door to his semi. He couldn’t get away fast enough.

As he rounded the corner and took off down the highway I said a silent prayer. Tears fell from my eyes. Why are these precious souls going to die when we have their cousins at home, free from harm? All animals deserve freedom. For the rest of my days when I see a truck loaded with farm animals destined to their death so “we” can eat them, I will stop – I will witness – I will pray, and I will remember the face of 234.   Please END THIS HOLOCAUST!