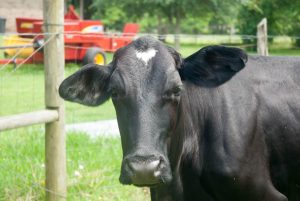 Before we ever became a sanctuary, Tommy wanted me to get more involved in the ranching aspects of the daily routines around the farm. I was not interested at all when we remarried and he thought that if I had a baby calf to take care of that it would make me more attentive to the ranching aspects that he needed help with. I bought Rowdy Girl for $300 and started bottle feeding her twice a day – she became my bouncing pride and joy! It worked! I started seeing the other cows and their babies and for the the first time in my life was drawn into their world. Rowdy Girl was my first vegan advocate. She and her daughter Houdini are the reason there is a Rowdy Girl Sanctuary. 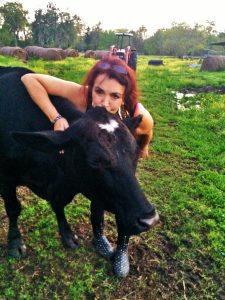 Rowdy Girl is a sucker for sweet feed! And no we don’t mean donuts. Sweet feed is a food source that we give the cows at the sanctuary that is in pellet form and is sweetened a bit with molasses.  It’s a yummy treat for them!

Rowdy Girl is now 6 years old and the prima-donna of Rowdy Girl Sanctuary – she became the leader of the herd once we became a nonprofit. In almost every instance when all the cows are changing pastures or running to get their daily feed, she and Houdini are first in line.

What Rowdy Girl did: 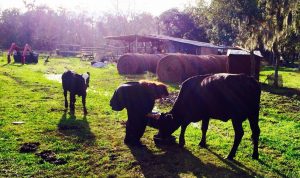 There are many reasons why I finally decided to stop eating these animals after getting close to Rowdy Girl:

1) They are sentient beings worthy of our love and respect

2) Our planet is being destroyed due to the import of animal agriculture on the soil, water, forests and air,

3) Many organizations deem animal products cancer causing.  And because of the way they are mass produced in cramped quarters with accelerated doses of antibiotics, growth hormones, and other drugs that are administered just to keep them alive in the worst of conditions, the meat is toxic. By the time animal products get to the freezers a multitude of coloring agents and other fillers are used to make them appear palatable.

4) Spiritually, we are what we eat – taking meat off the plate takes violence out of the mind – the soul is then able to embrace the highest form of compassion – true Ahimsa (non-violence) 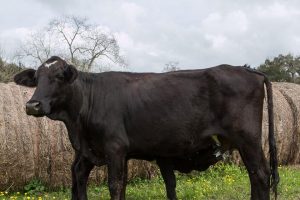 Rowdy Girl has forced us, through her quirky personality and perky attitude to take a deep look at ourselves and have a conversation that we were not used to, or even comfortable with having.  She forced us to examine certain motives that we use to justify sending these animals off to die, deliberately.  Once I finally decided to push myself to have this conversation, and came out on the other side, I knew something drastic had to be done, something completely different.  Fast forward to now, and it’s clear to see, Rowdy Girl changed everything. That’s why we named the whole place after her and why she’s the leader of the pack!

“I cannot remember the books I’ve read any more than the meals I have eaten; even so, they have made me.”

WHAT YOU CAN DO

IF YOU LOVE ROWDY GIRL AS MUCH AS WE DO, YOU CAN ADOPT HER!! CLICK HERE FOR MORE INFO.