All thanks to a cow named Houdini…

A heartwarming story about a good relationship and people who change

People who make revolutions are always fascinating to me, like the story before you, about two Texas cattle breeders who turned the farm into a sanctuary. How did it happen? In this case, look not only for the woman but also for the cow.

It all started, they say in a video (its short and cute and can be seen translated on the Animal Rights Anonymous’s Facebook page), when the cattle ranch Tommy owned was called for the 50th or 60th time about retrieving a cow that used to run away from the farm. “Next it will cost you a fine,” the cops had threatened Tommy. He explained to them that his wife Renee had become vegan and was against him selling the cows. When he returned to the farm with the fleeing cow, already given the name Houdini, he told Renee that it was impossible to go on like this. Then she came up with an idea: she offered to buy the herd and make the place a sanctuary. Tommy grinned,“It might work in New York or California,” he told her, “but not here, in Texas.”

To his surprise, after two weeks Renee managed to raise the money. So The Rowdy Girl Sanctuary was founded, named after one of their favorite cows. But this is not the end of the upheaval. Inspired by his partner, Tommy watched movies like Forks Over Knives and Cowspiracy, and also became vegan. It’s charming to see how the couple talks about their animals and notice the different character and personality of each. Renee says: “Most of the people who come to tour the sanctuary are from Texas, and most of them are carnivores. The dynamics change as bonds form: as they embrace the beast that they eat, it makes a change.”

The farm became inspirational for other cattle breeders, from Texas to Britain, from which a cattle breeder called who said he wants to become vegan and set up a sanctuary too. “Farms all over the world grow more cattle, that more people will eat. The oceans are turning into a sewer and it needs to stop,” says Tommy. “You can continue to bury your head in the sand or not. Meaning to look at where the world is going and to do the right thing.” And that’s what a cattle breeder says from Texas. We are, apparently, really in the right direction!

Preparation:
1. Filter the rice from the soaking water, transfer Put it in the pot and saute it lightly. Add the The boiling water, bring to a boil again, Cover, lower the flame and cook until That the rice softens. Turn off the heat, ventilate The rice in two forks, cover again And set aside.

3. Mix the contents of the pan with the rice, Season with a little olive oil and salt, taste And seasoning facilities. 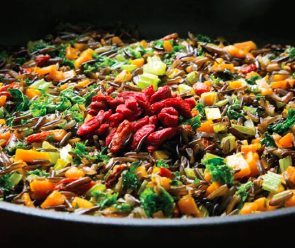