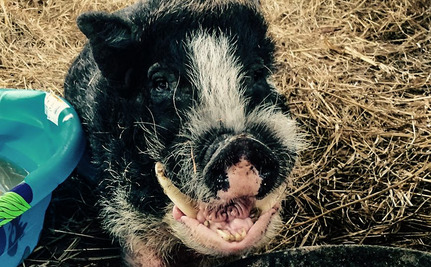 With 28 cows (and more babies on the way), six chickens, four horses, five dogs and four cats, Renee Sonnen-King and her husband, Tommy Sonnen, have a full house.

Renee is the same city girl I wrote about earlier who changed her tune when she went from a cattle rancher’s wife to a vegan, animal sanctuary owner. While she’s extra busy since her sanctuary fundraising campaign ends in a few days, she took the time to talk to me about what life’s been like at Rowdy Girl Sanctuary and the latest addition to the family: Herman the ‘Miracle Pig‘, who happened to be lounging in the once infamous Red Trailer. But before I get to Herman, I want to talk first about the Red Trailer and what it has meant to Renee and her husband. The Red Trailer’s Haunting Past

When Tommy was still in the business as a cattle rancher, the Red Trailer represented heartache, guilt, despair and helplessness for Renee.

The trailer used to roll in and take the calves away from the mamas. And it would destroy Renee and her marriage every time. She confided in me that the mamas would “cry into the night and into the morning” for weeks longing for their babies.

As part of her vegan process, she confronted herself and Tommy with tough questions: “Why don’t we slaughter one of our cows and eat ‘em?” While Tommy never had a problem eating an animal he hunted, he replied: “We can’t do that, we know them.” But Renee wouldn’t drop it. The two had entered this “weird” conversation about who should be slaughtered first. And she confessed to me that Tommy had picked “the bull calf with the bum leg,” also known as Lucky, who injured his leg when he escaped the Red Trailer before. 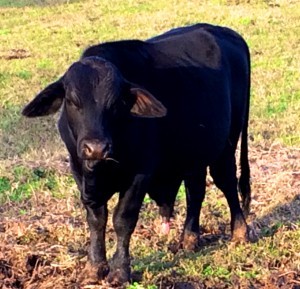 The tension in their marriage escalated to the point that she was “holding the cows ransom” — it would be the business or their marriage.

It’s here where the idea for Rowdy Girl Sanctuary was born. Renee needed a safe place for her cows. She researched a lot, but there was no farm sanctuary in Texas with the capacity for all her cows to go. And if they couldn’t go to a sanctuary, then the sanctuary would come to them. In fact, when Rowdy Girl Sanctuary is fully running, it will be the first “beef cattle ranch to convert to a vegan farm sanctuary” in Texas.

Renee got her first taste of saving lives with Herman the Miracle Pig. She received a Facebook message alerting her that there was a pig on death row only seven miles away. But that’s not the most heartbreaking part of Herman’s story. Herman used to be a companion animal, but his guardian died. The relatives came and got the other cats and dogs, but they left Herman in the backyard alone for six months.

She reached out to her community and in a few days they had raised the money for Herman’s transportation and enclosure. She described him as “mean,” “untrusting,” “scared” and “vicious.” He’s warming up to her now. And Renee has started singing a chant to herself and Herman: “the Red Trailer is being used for good purposes.”

How to Start an Animal Sanctuary

While she didn’t dream of her own sanctuary, Renee’s destiny, or purpose, found her. Here are a few thoughts from Renee about what it really takes to start an animal sanctuary when you don’t have many resources:

1. Do your research: Renee didn’t have nearby sanctuaries to turn to, but she had the Internet.

2. Ask for help: Renee told me that she reached out to the top sanctuaries, e.g. Farm Sanctuary, and begged them for help. Animal advocate Howard Lyman recommended that she visit a handful of sanctuaries before, but she didn’t have the time or resources for that. She also used her platform and asked for help when she needed it.

3. Expect to make some sacrifices: Renee confessed to me that her family hasn’t earned an income from the farm in months. They’ve had to dig into their savings to survive. She can also easily spend 60 to 80 unpaid hours on the sanctuary.

4. Find your voice: Personality does matter. While Renee said that she’d rather spend her time with the animals, she has to get administrative tasks done. That entrepreneurial knack comes easy to her because she’s owned her own businesses before. Social media savvy has been instrumental in her success. On a personality level, she stressed humility, expressing gratitude, resilience, a willingness to be a public figure and the vulnerability to tell your story and “find your voice.”

5. Stay inspired: “The animals need a voice, the animals inspire me,” says Renee. She always makes time to stay connected to her animals. While she enjoys singing to them, she spends most of her time being present with them in silence. Her community, and their messages, donations and gifts keep her inspired.

6. Stay an activist: Activism is something that Renee doesn’t turn off. She told me that she’ll go up to strangers at the supermarket and tell them, “Do you know those are period eggs?” She maintains rooted in her activism by educating herself (even if that means watching graphic slaughter videos). She also plans to visit an actual slaughterhouse and document the animals’ stories.

7. Have 100% faith: Renee says she asks a higher power for “green lights,” and she keeps getting them. She has this unwavering belief that she’s living her purpose, even if that makes her a little crazy. As she told me, “I had to lose my mind to get the one I got now.”

8. Have a vision: Renee envisions many Rowdy Girl Sanctuaries across Texas, the country and the world. She’s creating more than a sanctuary — she’s creating a sanctuary template for those other desperate wives. She envisions that Rowdy Girl Sanctuary will sustain itself by growing sustainable food for communities, offering vegan cooking classes, providing education outreach in schools and serving as a retreat center for vegans.

I’d like to leave you with what touched me the most in our conversation.Through tears and a breaking voice, Renee shared that she’s wanted to be a mother since she was seven-years-old, but:

Because I can never have kids, I believe I’m giving birth to something that is so much bigger, something so much greater. I always wanted my own kids. I feel like God was preparing for me for this. Sometimes we don’t know why we’re not getting what we think we want. But there’s a bigger purpose that we’re on earth to birth. And this is what I’m birthing.

While I hope that Rowdy Girl Sanctuary is a total success, it’s clear to me that Renee knows it will be.