It’s said that love knows no bounds. For a potbelly pig named Ivy, this proverb couldn’t be truer.

The object of Ivy’s affection is another potbelly pig named Herman. When Ivy arrived at Rowdy Girl Sanctuary in Texas last July, she decided that she didn’t only want Herman to be her stall mate, she also wanted to be with him every second of the day. Renee King-Sonnen, founder of Rowdy Girl Sanctuary, tells The Dodo that Herman wasn’t too sure at first: “Ivy was a sassy little girl. She was smaller than Herman, and Herman didn’t want anything to do with her when she first came in.”

Ivy and Herman in their stall

After a bit of time, Ivy managed to find a way to waddle into Herman’s heart, and the two of them became inseparable. “She always wanted to be where Herman was,” Renee says. 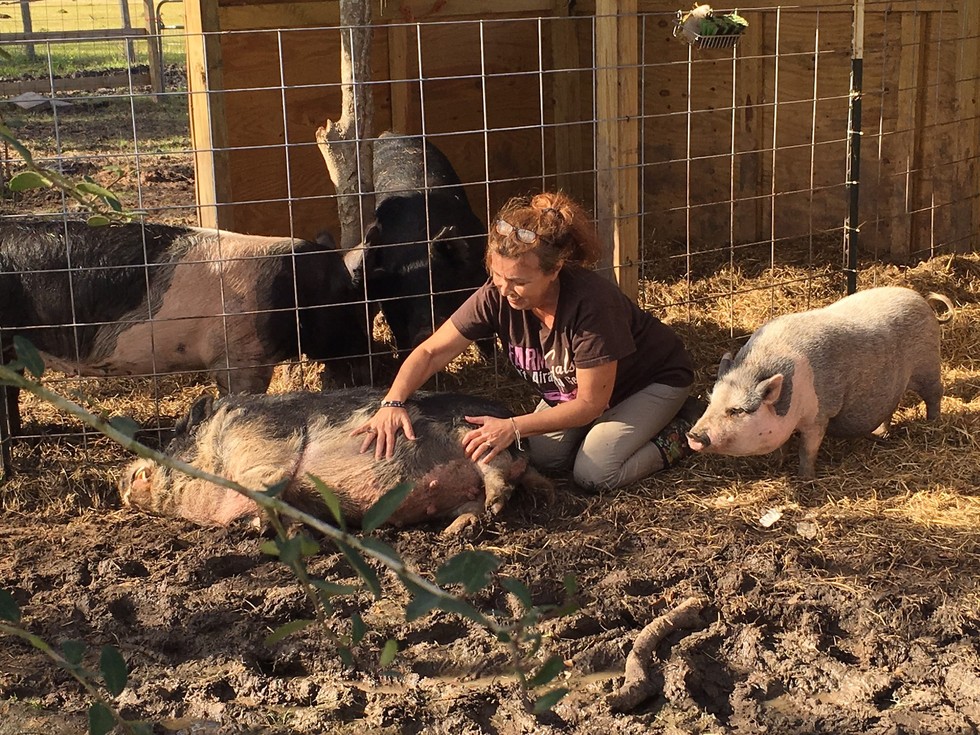 The pigs — who were both rescued from neglectful situations — ate together, slept next to each other, and even went for adventures around the sanctuary together. The pigs adored each other so much, the volunteers called Herman and Ivy boyfriend and girlfriend. 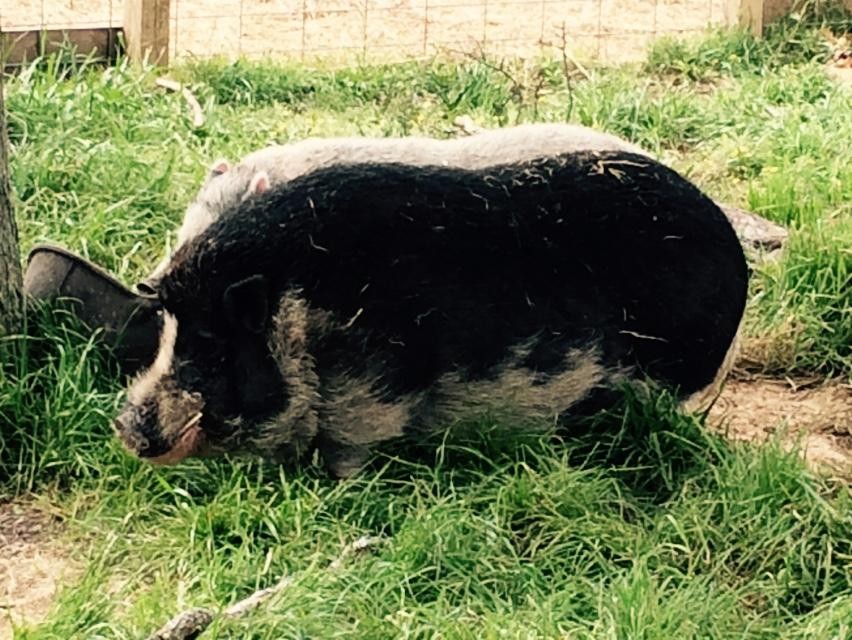 Can you spot Ivy? That’s her directly behind Herman, trying to share his food.

Unfortunately, Herman became seriously ill a couple of weeks ago. The vet who examined him believed it was cancer, but didn’t think there was much they could do for him. The ever-devoted girlfriend, Ivy stayed by Herman’s side throughout his illness. She slept near Herman to make sure he was never alone, and when Herman passed away on March 31, Ivy was right there with him.

“My husband told me that she went to his grave and wouldn’t leave,” Renee says. “She stayed there for hours and hours.” 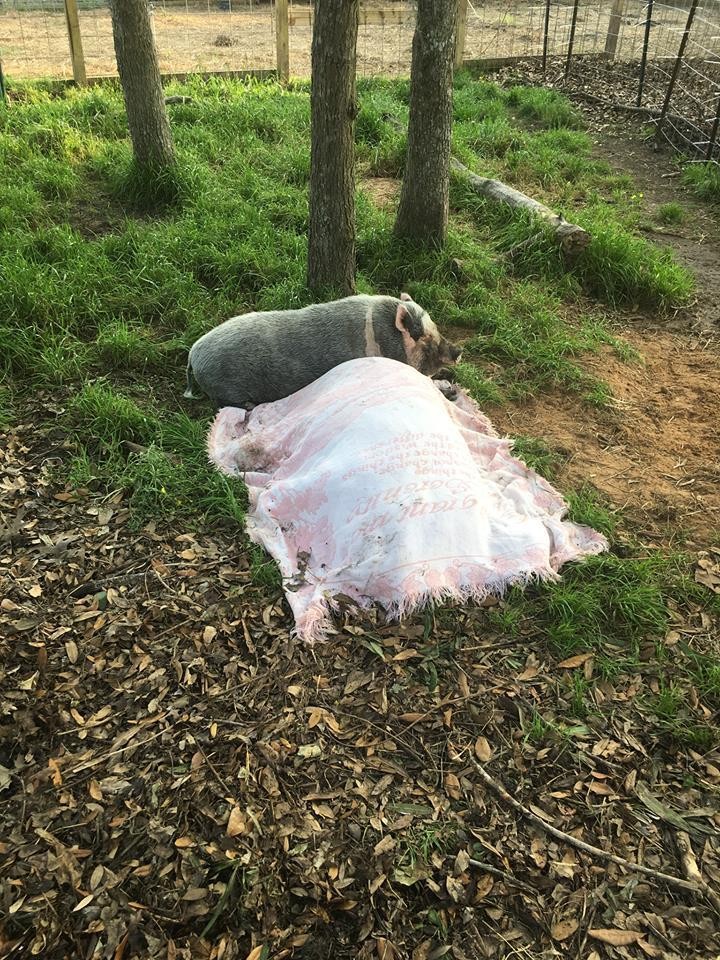 Love knows no bounds! Ivy won’t leave Herman’s side, even after he passed away.

Ivy is still in deep mourning for Herman, but she’s getting lots of back caresses from her human friends, as well as attention from the other animals at the sanctuary. While no one will ever be able to replace Herman, the love that surrounds Ivy at Rowdy Girl Sanctuary will surely bring her comfort. 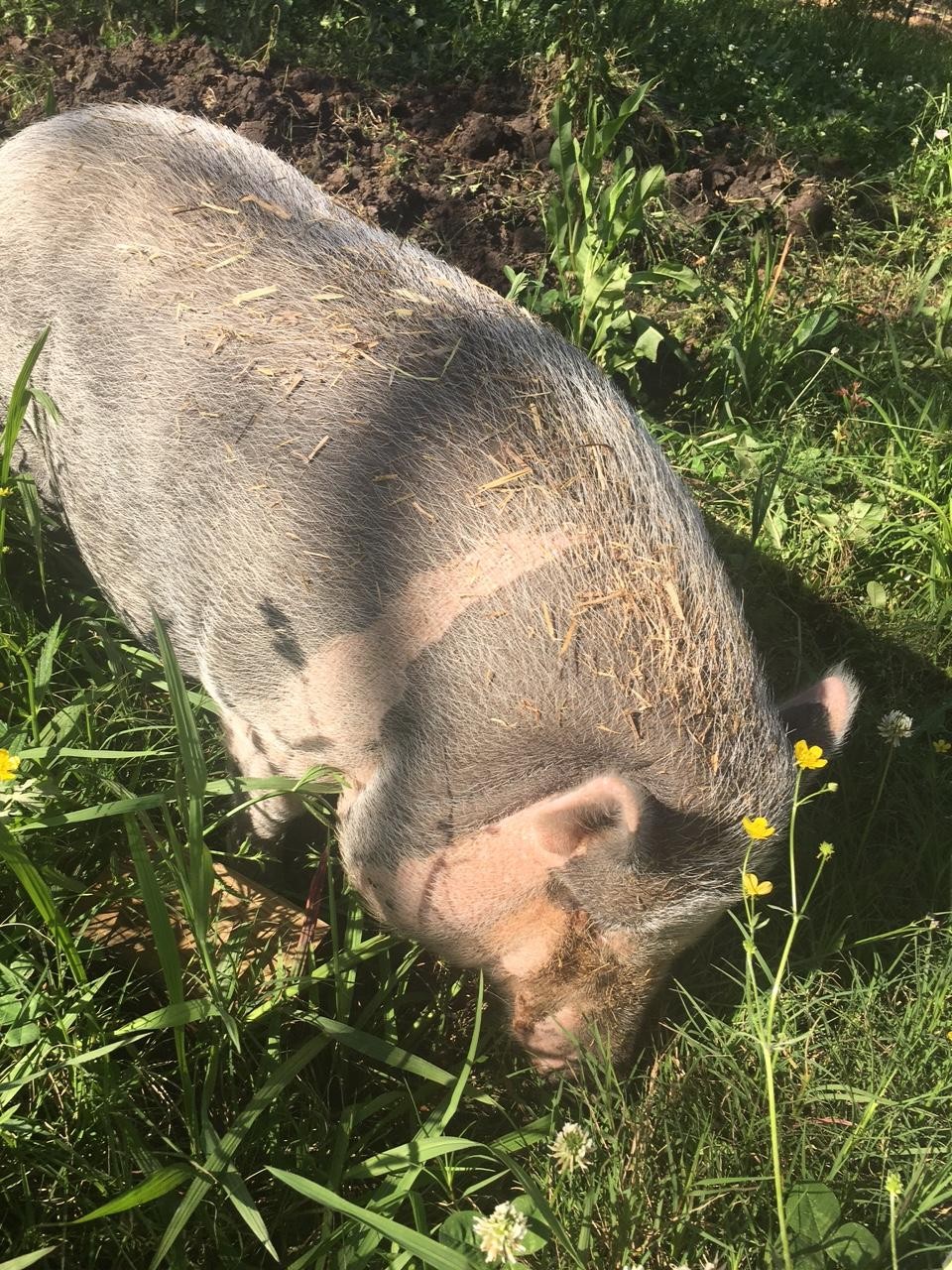 Renee started Rowdy Girl Sanctuary after marrying a multi-generational cattle farmer named Tommy. Within months of moving to Tommy’s ranch, Renee started to find it heart-wrenching to watch the cows — whom she thought of as her “babies” — being taken away for slaughter. Renee started watching animal rights documentaries and slaughterhouse videos, leading her to become vegan. She eventually convinced her rancher husband to turn his farm into a sanctuary, and even bought her husband’s last herd of cows so the animals could live out their days on the land. Tommy is now vegan as well, and supports his wife in everything she does.

Herman the Miracle Pig from Katie Kenney on Vimeo.

The video of Renee singing to Herman was recorded by Katie Kennedy, an animal activist on a mission to visit as many animal sanctuaries in the U.S. as she can. You can follow her blog here.