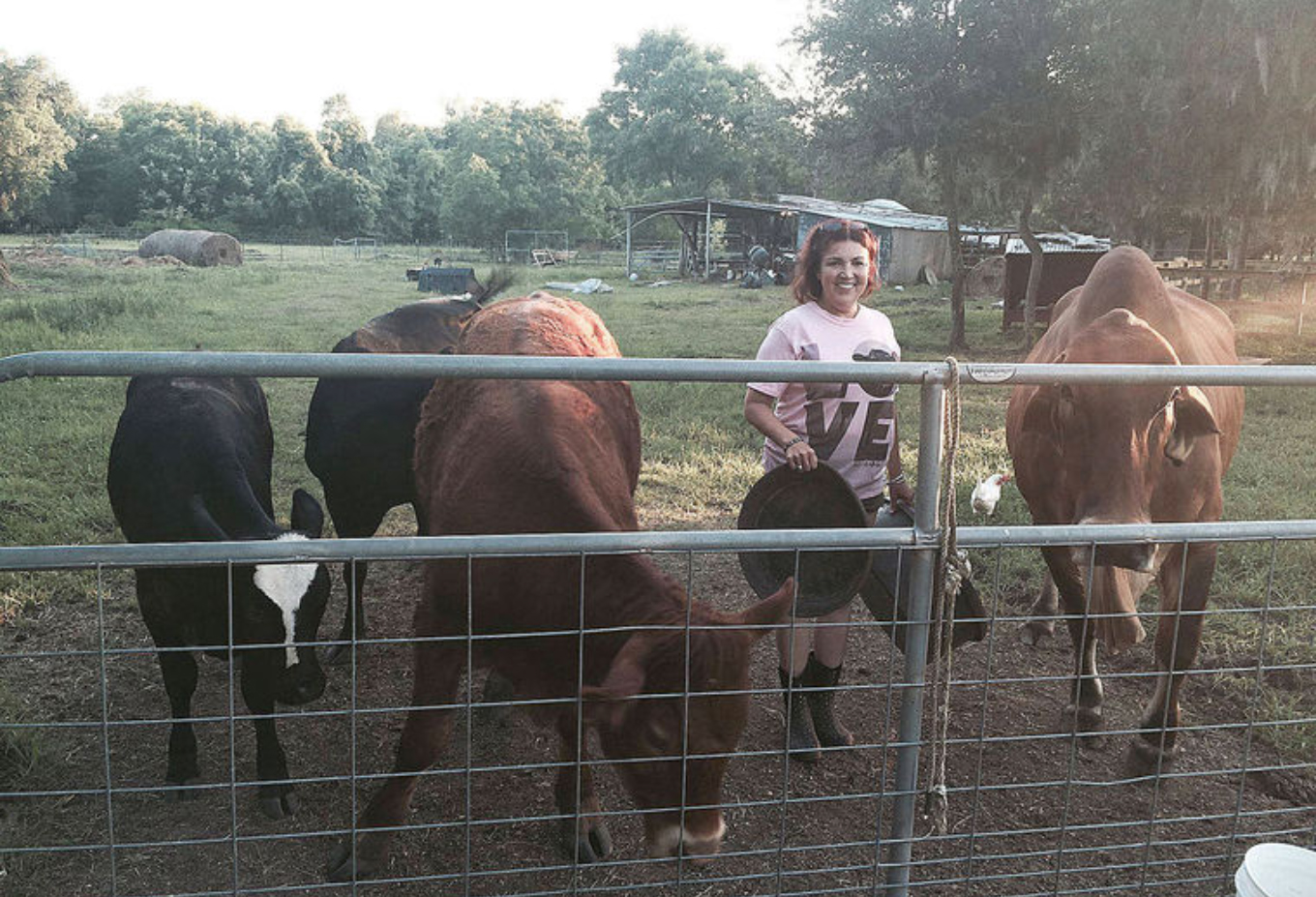 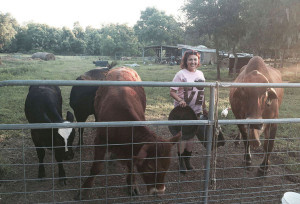 ANGLETON — For generations, Sonnen Ranch has been a place for raising livestock — where animals, though treated humanely, were destined to be used for meat or dairy products. Now, after several rounds of fundraising, the ranch has been transformed into Rowdy Girl Sanctuary, a safe haven for farm animals, allowing the creatures to live out their lives without distress.

The sanctuary’s development was the brainchild of Renee King-Sonnen, who moved to the ranch when she and Thomas Sonnen remarried.

“I’m a Texas girl through and through, grew up eating barbecue, wearing boots, going to the rodeo,” King-Sonnen said. “Until I moved out here to the ranch, there was no connection to the animals that ended up on my plate. I’d experimented with vegetarianism, raw food diets, but never really called it ‘vegan.’ It all happened as a result of me living here.”

Being in the presence of farm animals — and seeing their reaction after calves were sold — was enough to change her mind about her diet and lifestyle, King-Sonnen said.

“The cows were so depressed,” she said. “I wasn’t prepared for the way it happened. And every year, it got harder for him to sell the calves, because he didn’t want me to see, wanted to hide it from me.”

“I’d been trying to sneak them out whenever she wasn’t around,” Thomas Sonnen said. “But she’d know anyway.”

Eventually, King-Sonnen laid down the law: If the “red trailer” came again to take calves to the sell barn, she’d follow it herself.

“So he told me he was going to sell the whole herd, was getting out of the business,” she said. “That meant all the cows that had lived their lives here were going to be slaughtered. They wouldn’t have a chance.”

Because Sonnen couldn’t just give away the cattle, his wife asked him a simple question.

“She asked to buy them from me. I asked why, and she said she would keep them in sanctuary,” he said. “I thought that was crazy. This was Texas, it wasn’t going to work. But I said ‘OK, go for it.’”

King-Sonnen turned to the Internet for help, blogging at her “Vegan Journal of a Rancher’s Wife” page and starting an Indiegogo campaign to purchase the animals. In under four months, the necessary funds had been raised, and the sanctuary was founded.

“All these people across the country, across the world, were rallying and supporting us, cheering us on,” she said. “In less than four months we’d raised more than $36,000.”

“I didn’t know if she could do it, but she raised the money and bought the cows,” Sonnen said. “The sanctuary’s working. It’s pretty incredible, all the help she’s gotten.”

Eventually, Sonnen came around to the vegan lifestyle, as well — though for different reasons from his wife.

“My dad died of a heart attack when he was 62, and I had high cholesterol,” he said. “I’m doing it for health reasons. Started cooking for myself, learning a little bit and went full-fledged vegan when I found ice cream and cheeses that would work. And I had my blood work the other day. My cholesterol’s way down.”

To keep the sanctuary sustainable and generate some income, plans are in the works to open a veganic farm on the property, where fresh produce can be made available to the public. Shelley Katz, who met King-Sonnen after looking for ways to approach ranchers, is hard at work growing crops for the farm’s opening.

“I remembered reading about Renee on the Internet, so I asked her how I could approach ranchers about turning ranches into produce farms,” Katz said. “We just kept talking for months, and I’ve been here for over two weeks, just doing what I can.”

After another successful crowdfunding, this time on the website Barnraiser, the sanctuary will be able to purchase the necessary tools to grow a larger and more diverse crop. For the moment, Katz is keeping herself busy.

“Probably 200 plants started already, herbs, melons, cucumbers, all kinds of stuff,” she said. “Within two months, lettuce and herbs should be available first, because they’re the fastest-growing. The goal now is to get it off its feet, a regular yield coming in, a loyal customer base, then pull up the numbers and see the difference between the farm and the cattle ranch.”

King-Sonnen hopes her project will serve as a model to others absent any judgment, she said.

“There’s other sanctuaries in Texas, but as far as we know we’re the only beef cattle ranch that’s gone vegan,” she said. “We’re not out here telling everybody they’re wrong, it’s just something we couldn’t ethically do anymore.”

Beth Arnold, an early contributor to the campaign and a member of the sanctuary’s board, remains impressed by the speed at which the project has grown.

“I can’t believe how much she’s done in seven months,” she said. “Her original goal was to save the cows, and now it’s turning into a whole movement. A lot of people believe in what she’s doing, changing the way they view farm animals.”

Already, the sanctuary has received a steer from a Future Farmers of America family that could no longer care for it, and Rowdy Girl rescued a pig that had been abandoned for six months after the death of its owner. “Herman, the Miracle Pig” prompted the first of what could be more expansions for the sanctuary, and King-Sonnen is happy to do her part to help animals in danger.

“Any animal that’s going to be slaughtered, or is in harm’s way,” she said. “They’re treated like family members, and we take care of them every day, to let them have the lives they deserve.”