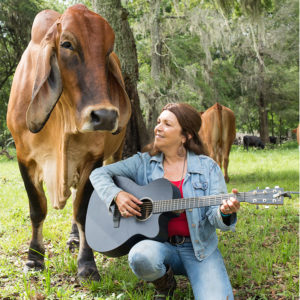 Renee was born and raised in Houston, Texas and is the founder of Rowdy Girl Sanctuary. Renee was a dyed-in-the-vegan wool city girl before moving with her husband, Tommy, to their Angleton, TX Ranch in 2009. She fell in love with all the farm animals on the ranch. She had no idea that her life was about to be forever changed as a result of her husband’s ranching business.

After witnessing time and time again the ranch’s baby calves going to the sale barn, she became more and more depressed about the inherent cruelty of the ranching business. By October 2014, she had decided she no longer wanted any part of ranching. She went vegan and began her pursuit of a dream to open a farm animal sanctuary. She forged relationships with many key leaders in the vegan movement who offered insight and counsel, and with tremendous determination worked toward creating a sanctuary out of what was once a beef cattle ranch.
As a result of her transformation numerous media stories have been published, and have gone viral. Their story has been seen all over America numerous times on CBS, ABC, RFD,  and Animal Planet. Rancher families reach out to Renee on a regular basis because her story has landed in their living room via the news, a TV story or a documentary. Ranchers and their families relate to Renee, and it wasn’t long before she realized that she was also a Ranchers Advocate–and the Rancher Advocacy Program was born. In July of 2018 RAP was launched and is on a fast pace to help animal farmers transition to sustainable business models that are good for the planet, the animals and the farmer.
Renee’s prior background includes a career as a professional singer, songwriter, and recording artist. In her life before Rowdy Girl Sanctuary, Renee traveled extensively with her band, Renee King & Wildcard, and her album, Renee King Queen of Honky Tonk. In addition to her work in the music business, which also included producing and being a publicist, Renee was a Top Producing Realtor for five years running in Pearland, Texas.  She founded and owned a wellness spa, where she was a certified Hatha and Kundalini yoga instructor and Ayurveda practitioner.
Renee’s passion is her greatest asset. She believes her true calling has finally found her in her work at Rowdy Girl Sanctuary. Her desire to be a mother has been fulfilled in the care of the farm animals at RGS.  And now she is a catalyst for change in a sometimes dark and cruel world to educate others about the vital importance of adopting a vegan lifestyle. Renee finds her greatest strength in the still, small voice inside her that she has come to know through her practice of yoga and meditation. And she gives much credit to a guy named Bill.